The 23-year-old opened the scoring for his side at the Allianz Arena, but goals from Marcelo and Asensio gives Real Madrid the advantage going into next week’s return fixture.

“We were completely naive and reckless with our chances. Real shot twice on goal and twice they scored. That’s their quality and that just [must] not happen to us” Kimmich told ​German media after the game. 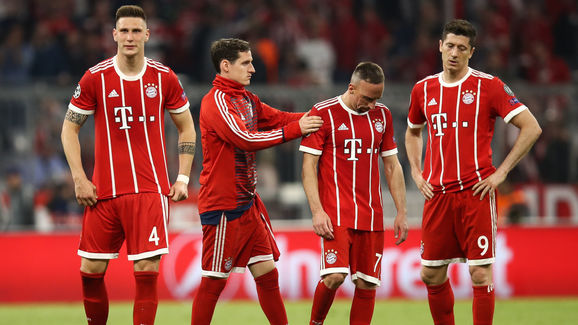 “If a team shoots twice on goal and scores twice, that’s quality. But today they have also clearly shown that they have very big weaknesses.”

The German defender has played 41 times this season in all competitions, and already with the Bundesliga title all wrapped up, will be hoping to turn the game around in the return leg. But, with wasted opportunities in the first leg, Bayern will need to step things up if they are to proceed any further in the competition.

“Last season we also turned it around, more or less, so that we took the game into extra time. We know that we have to score two goals. It’s possible – Juve showed that, we showed it last year” Kimmich added.

“I would say the game itself was not a bad one, but such mistakes are simply punished in the Champions League semi final, especially against Real Madrid.

“I did not expect that we would have so many chances, but you just have to take them and kill them in the first half.”

Bayern Munich need to score at least two goals at the Santiago Bernabéu to reach the final of the Champions League.

Real Madrid will be hoping to become the first team to lift the prestigious trophy three years in a row, since Bayern Munich themselves achieved the feat between 1974 and 1976.