​It is very rare that an​ Clasico goes by without so much as a hint of controversy and last Sunday’s 2-2 draw at Camp Nou was no exception.

After going behind on two separate occasions, ​Real Madrid were able to fight back against ten-man ​Barcelona but were not able to end the Catalan giants’ unbeaten league record.

As good as the game was, it was undermined by controversial incidents. No less than eight yellow cards were brandished, while Barcelona right-back Sergei Roberto was dismissed following a clash with Marcelo. 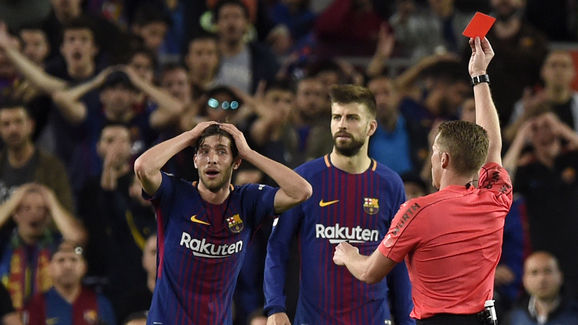 The decision clearly angered Barcelona centre-back Gerrard Pique and his dismay was plain to see when he engaged in a half time squabble with Spanish teammate Nacho Fernandez.

The exchange, captured by ​Carrusel Deportivo, sees Pique approach his compatriot in the tunnel as the team’s line up and quip:

Nacho, justifiably annoyed was then seen to respond by asking:

The exchange encapsulated what was to be a feisty affair, with tensions continuing to mount in the second half.

After the game, Los Blancos captain Sergio Ramos was also quoted to be clearly annoyed with Lionel Messi’s actions during the game; particularly with regards to his treatment of referee Alejandro Gomez.

Speaking to reporters, Ramos complained: “Messi put him under a bit of pressure in the tunnel, I don’t know if there are cameras, maybe he caused him to referee in the second half in a different way”