The Colombia international’s immediate future in Bavaria still hasn’t been decided and the clock is ticking for Bayern Munich to make Rodriguez’s deal permanent, with the Bundesliga champions needing to pay €42m by 15th June.

With it clear that the 27-year-old is surplus to requirements back at his parent club Real Madrid, teams across Europe are now lining up to land the 2014 World Cup’s poster boy before the start of next season. With Eden Hazard on his way out of the club this summer, it’s only natural that Chelsea will be looking for a marquee name to fill the Belgium international’s boots. This isn’t the first time that Arsenal have been linked with a move to sign James Rodriguez, having been tipped to sign any semi-creative player under Paris Saint-Germain might have an unlimited transfer budget in every transfer window, but the scrutiny of their ability to comply with Financial Fair Play regulations is growing every season. 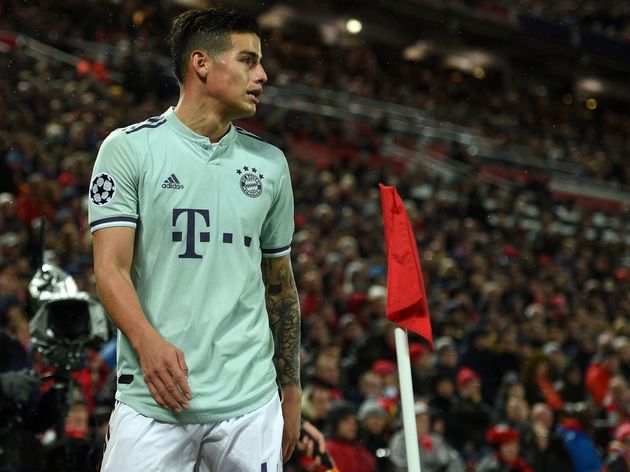 Bundesliga champions Bayern Munich have just a few weeks left before the chance to sign Rodriguez for €42m is taken away from them, with the Colombian now at the end of his two-year loan deal at the Allianz Arena.

Even though all the signs are now pointing to Bayern Munich not activating Rodriguez’s clause, the club’s top brass have previously hinted that the loan would be made permanent, and at the very least it would allow the Bavarians to re-sell the midfielder later this summer. The shakeup that is set to happen at Atlético Madrid Out of all of the Premier League clubs who are believed to be interested in signing Rodriguez this summer, a switch to Manchester United would make the most sense for everyone.

The only thing holding a move to Old Trafford back is that United appear to be focusing their attention in signing young, British players ahead of the new season.

And with so much work still to do behind the scenes in the north-west, fans might be forced to wait until next summer before any high-profile arrivals of Rodriguez’s ilk make their way into Manchester United’s dressing room. It’s common knowledge that Juventus could be looking offload Paulo Dybala this summer as the Argentine continues to grow frustrated in Turin, and the club’s top brass will be looking to offer their new manager a new marquee player upon their arrival.

Rodriguez’s arrival at Juventus would boost their short-term ambitions of winning the Champions League too, offering the Colombian another shot at working alongside his former Real Madrid teammate Cristiano Ronaldo.

Although the Bianconeri’s interest in Rodriguez is still something which is largely up for debate, recent reports are suggesting that the Italian champions are at the front of the queue for his signature.