​This summer, some of Europe’s most exciting young talent will make their way to Italy for the European Under-21 Championships, and fans will be on the lookout for the next superstar.

In the past, we’ve seen the likes of Thiago, Petr Cech and the mighty Royston Drenthe use the stage to propel themselves to stardom, and plenty of others will almost certainly do the same this summer.

Here are eight players for you to look out for. There’s a huge chance you’ve already heard about Brescia’s Sandro Tonali but, unless you watch the Italian second division, you probably haven’t seen much of him on the pitch. Well, now’s your chance.

Touted by many as the heir to Andrea Pirlo’s Italian throne, Tonali has already been linked to almost every European giant. The 19-year-old midfielder is technically sound and has passing vision far beyond his years, whilst he can read a game perfectly to decide whether to push forward or stay back.

He already has two senior international caps to his name, and expect that number to skyrocket in the near future. Luka Jovic has already spent the early weeks of this summer in the spotlight after sealing a big money move to ​Real Madrid, and he will have even more eyes on him this summer when he represents Serbia.

The world is Jovic’s oyster right now. He burst onto the scene in the ​Bundesliga, took Europe by storm and earned himself a spot at the Santiago Bernabeu as a result. Goals are like oxygen to him, and you already know that he’s looking for that Golden Boot award when all is said and done.

A huge summer would help him carry his confidence over to Madrid, and fans of his new side will certainly want to keep an eye on his performances. Lyon have put together a stunning group of young talent, and 20-year-old Houssem Aouar is right at the heart of that. He is already one of his side’s most important players, and a big tournament this summer will only help cement his status as one of France’s brightest prospects.

Les Bleus have so much talent, it’s actually tough to wrap your head around it all. Yet, Aouar still manages to shine through. Another composed midfielder, Aouar can see a pass about four moves in advance, and then he’s technically skilled enough to pick that pass. As a bundle of perpetual motion, Aouar is truly thrilling to watch.

Fans across Europe might soon be getting better acquainted with Aouar, as the likes of ​Chelsea, ​Liverpool and ​Barcelona have all been linked with him in the past. Just watch him, and you’ll see why. 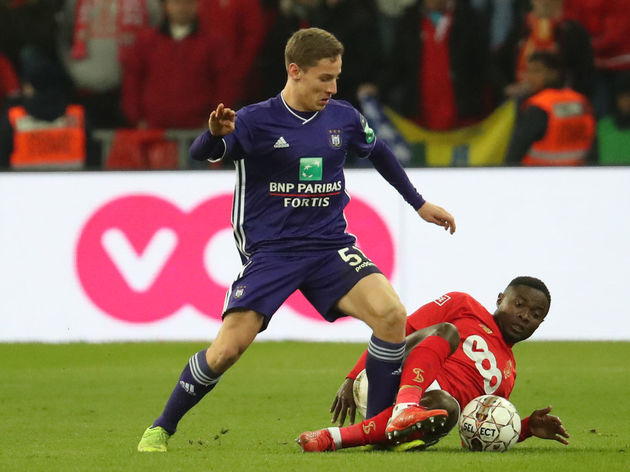 The Belgian conveyor belt of talent never stops, and the next youngster off the production line is 17-year-old midfielder Yari Vershaeren. The Anderlecht starlet missed a lot of Belgium’s qualification for the tournament because of his school exams, but Johan Walem was clearly desperate for Verschaeren to join up with the squad anyway.

He is yet to appear for Belgium Under-21 side, and there’s a good chance his game time could be limited this tournament as a result, but he is certainly not just there for the experience. Verschaeren’s excellent vision, creativity and movement have already earned him multiple appearances in the Belgian top flight and in the Europa League, and he will be a welcome addition to their squad.

Driven by success, Verschaeren is a manager’s dream, and Walem may have little choice but to play the teenager. He’s that good.

As one of Europe’s most prolific wingers last season, Denmark’s Robert Skov deserves plenty of attention.

He racked up a stunning 32 goals and 10 assists on the right side of Kobenhavn’s attack, and if those numbers don’t get you excited, then I don’t know what will. With an intimidating blend of speed and power, Skov can strike fear into the heart of even the most competent defender, which promises for some exhilarating viewing.​

A number of ​Premier League sides, including ​Tottenham Hotspur, ​Watford and ​Wolverhampton Wanderers have all chased him in the past, and a number of impressive outings this summer will surely increase his chances of a huge move abroad. England’s Young Lions often find themselves under a lot of pressure to perform, but one man who has never shied away from centre stage is ​Manchester City starlet Phil Foden.​

‘The Stockport Iniesta’ ended the season in emphatic fashion with the Citizens, netting a winner against Spurs which went a long way to steering his side to the Premier League title, and English fans will be hoping for a similar showing this summer.

The 19-year-old’s vision and movement has helped him win over Pep Guardiola, and also earned him a place in the heart of Aidy Boothroyd’s midfield. He will be looking to pull the strings for England, as they seek to avenge 2017’s semi-final exit. Dani Ceballos was instrumental as Spain stormed to the European title in 2017, winning the Player of the Tournament award for good measure. This summer, he will come back to try and defend his crown, so big things will be expected of him.

The 22-year-old is yet to fully make an impact with ​Real Madrid, so much so that he has been linked with a move to the likes of Spurs and ​West Ham United. This summer could be a chance to earn himself a transfer, or perhaps even a greater role in Madrid.

Europe already knows exactly what Ceballos is about, but some people may just need a gentle reminder. Germany just gets youth development. Wherever you look, it seems there’s hundreds of German youngsters ready to break into superstardom, and goalkeeper Alexander Nubel could be next.

The 22-year-old took over the reigns at ​Schalke last season, and impressed enough to earn himself comparisons to ​Manuel Neuer. Agile and great with the ball at his feet, many have joked that Nubel could do a job outfield, let alone in between the sticks.

Those who have seen Nubel play will agree that it seems just a matter of time before he takes over in the senior side but, for know, he will continue to cut his teeth with the Under-21 setup.