If this summer has taught us anything, it is that Zinedine Zidane wants Paul Pogba at Real Madrid.

Unfortunately for him, Manchester United don’t want to sell. Los Blancos may not get their man, but is that even a bad thing? There are plenty of other moves which make far more sense.

Here are five options Real should consider instead of signing Pogba. So, let’s start with the option that has been ​suggested in Spain. Not only is it a matter of ‘two is better than one’, but the two that ​Real would be getting are truly special.

​Napoli’s Fabian is the true alternative to ​Pogba here. A physical presence with deceptive agility, the 23-year-old can do everything in midfield, just like Pogba can. Whilst his goal and assist rate may not be as high as Pogba’s, he still has plenty of time to improve on that, and Los Blancos could certainly help him do so.

He would be far cheaper than Pogba, which leaves money available to bring in Christian Eriksen. The ​Tottenham Hotspur man wants out this summer, and his creativity would cover for Fabian until the Spaniard develops his game. This bolsters the squad in two positions, and feels like a no-brainer.​ Why Real would even consider selling Dani Ceballos is anyone’s guess. The Spaniard has immense potential which has been on show at the European Under-21 Championship, and scouts around the world are keeping their eyes on him.

He can score goals and he can create them too, so he offers exactly what Real are looking for with Pogba. But, if that’s not enough for Zinedine Zidane, then bringing ​Isco back into the fold should do the trick.

When ​Isco is given the chance, he can be one of Europe’s finest creators. He could combine with Luka Jovic or ​Eden Hazard and terrorise defenders across the continent, and it wouldn’t cost Real anything new.​ To those with short memories, signing Sergej Milinkovic-Savic and Adrien Rabiot is about as bad of an idea as you can get. However, ​if you look past the pair’s disappointing seasons, the frightening potential is clear to see.

Beginning with Milinkovic-Savic, he does everything that Pogba can. He can rack up the goals and assists, whilst his composure, physicality and technique are almost identical to the Frenchman’s. Milinkovic-Savic would be a cheaper alternative, and he is two years younger.

Add that to the free signing of Rabiot, who is available upon the expiry of his Paris Saint-Germain contract, and you’ve got yourself a terrifying midfield. Rabiot can sit deep and pull the strings, but is also capable of stepping forward and adding the odd goal in the process. This pairing offer anything Real could possibly want from Pogba. 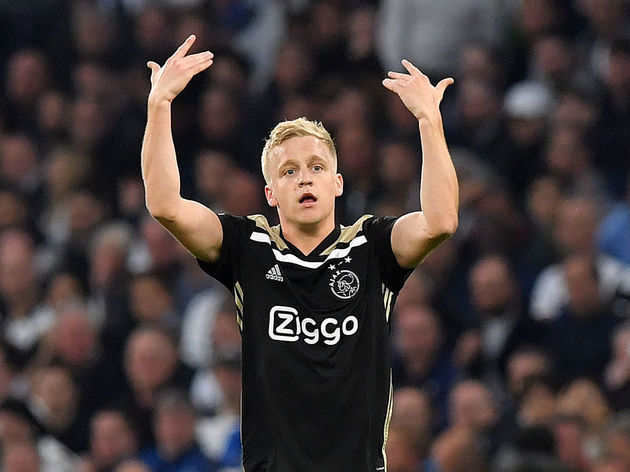 Just because Real have the money to sign two players this summer, doesn’t mean they have to​.

Donny van de Beek – a vital part of the Ajax side who took Europe by storm last season – is another viable option. From midfield, the 22-year-old bagged 17 goals and 13 assists last season, including an assist against Real at the Santiago Bernabeu.

Erik ten Hag’s system showcases the best of Van de Beek’s movement, so he is clearly comfortable bursting forward when he needs to. He may not offer the most defensively, but that’s not his job. At his best, Pogba is a free-flowing, box-to-box powerhouse – almost a graceful wrecking ball. Now, how would you describe 20-year-old Federico Valverde?

Whilst he is far from the finished product, the signs are there that Valverde could develop into the kind of player that Pogba is today. The Frenchman was 19 when ​Juventus gave him his big break, and Real could do the same for Valverde.

This is more of a long-term option, but the potential benefits are enormous. Not only would they save a huge amount of money, but they would also be rewarded with their own star midfielder.​