“I can’t say I’m proud of what I did. That said, I don’t regret it. Because if I did, that would be like validating all the words that this person told me. And I can’t accept that.”

But what an impact it was. What an oof. 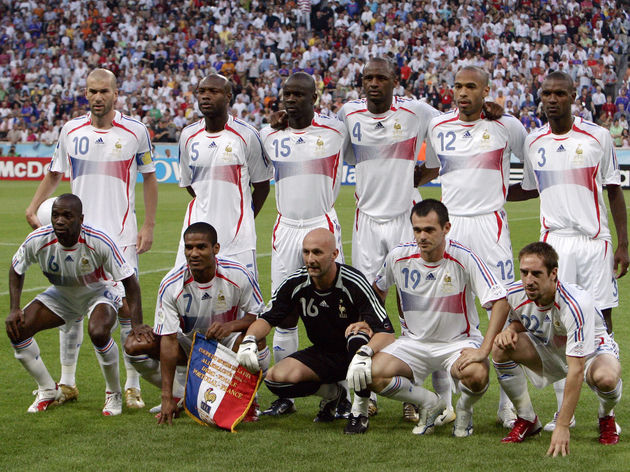 If there were any questions over Zidane’s readiness to take his final game as an international by the scruff of its neck, then the pre-game team photo dispelled them. Ball in right hand, left hand by his side, a foot away from his nearest teammate, this was all about him, and he was prepared for it to be so.

To be fair, even if the swansong wasn’t on the agenda, it still would’ve been all about Zidane. It had been since the last 16, with his ensuing exhibition against Brazil still the greatest individual performance I’ve seen this century. Enjoy it here.

So, after that masterpiece, what could Zizou do to capture the limelight now? Well, how about Panenkering the greatest goalkeeper of that same century? Yeah, why not. Done.

But then, a snag: that pesky fame-seeker named Marco Materazzi, who had already given away the penalty that allowed Zidane to Panenka ​Gianluigi Buffon and nearly scored an own goal with a defensive header, brought the Italians back level with a better-timed header.

So the Panenka was insufficient. A greater myth had to be written. And Zidane set about writing it. He tried free-kicks like the one that bested Brazil in the quarters, he tried headers like the ones that had bested them back in 1998, hell, he even tried to beat Buffon from a corner – all to no avail.

Only this time, it happened in the best/worst way.

That dichotomy is at the heart of this most glorious, most disgraceful – certainly most famous – headbutt, because, as you can imagine, such an act on such a stage is not a completely unifying venture.

So, how about this act.

Well, technique-wise, it was superb. Before we get to the impact – and we will – how about an acknowledgement of the scene in cinematic terms? Because, let’s be real, even if it wasn’t initially picked up by the cameras, it has the kind of blocking Stanley Kubrick would be proud of.

From the continued nattering of Materazzi, to the initial indifference of Zidane, to the jog away, to the final verbal dagger from the Italian, to the burst of red-hot rage, to the stoop, to the strike, it’s perfect.

And so to said viper-like strike. Said ram from the GOAT of his generation. The first thing that hits you upon a rewatch is how arresting it still is, because it’s an incredible sight carved right from a bygone era of the sport.

And it’s the sudden halt of the jog, followed by the immediate stop and thrusting of the fists – window-breaker style – for maximum affect that make it so. Indeed, so affecting is this impact, that the Frenchman himself stumbles backwards in the immediate aftermath, in what we would now recognise as some form of concussion symptom.

Then, in a daze, he’s off. His chances of a second Coupe de Monde gone, and with it his name on that year’s Ballon d’Or, and with that, we’d later find out, his footballing career

For a while, France stood with the rest of the world – except for Italy – in shocked silence. But, as the Azzurri celebrations began, so too did the resistance. The fans rally around their forlorn hero, the narrative of worthwhile revenge is plotted, and redemption is found.

Before the night is over, ‘Zizou On T’aime’ has been plastered across the Arc de Triomphe, and, upon the team’s return to France, it is screeched by the welcoming crowds. Capturing this in an address to the nation at this welcoming, the President, Jacques Chirac, declared: “My dear Zinedine Zidane, I would like to express the admiration and the affection of our entire nation, as well as its respect.”

Of course, forgiveness was not universally offered, with many naturally dismayed, including Raymond Domenech, the French coach, and Arsene Wenger who, revisiting the moment during the excellent documentary ‘Les Bleus: Une Autre Histoire de France’, admitted: “I was absolutely and utterly confused.

“A player of his stature playing his final match, the very moment when he’s supposed to keep his cool, committing this act of treason towards the rest of the team. He was insulted, granted, but it wasn’t the first time. He was insulted every match. He made such fools out of his opponents that they insulted him hundreds of times.

“The Italians knew him. He knew what to expect from them.”

Veteran teammates like Lilian Thuram were equally displeased, especially with the reaction claiming it was justified.

For many others, though, it was a relatable moment of madness that tied the knot on an unprecedented French career. Among these was actor Omar Sy, who mused: “I actually liked the headbutt, to be honest. It showed he was human. He wasn’t a robot. He was human and he had his own character and faults. I found it touching.”

On reflection, was he right to do it? No. Was it poetic? Of course. Was he rightfully exonerated? Absolutely.

And it is probably Thomas N’Gijol, a colleague of Sy’s. whose quote resonates the most today.

“For Zinedine, the kid from Marseille, such an exit was sad,” he said.

“But it was beautiful.”