​Goals from Raphael Varane and Karim Benzema either side of half time saw Real Madrid overcome Espanyol at the Bernabeu, stretching their unbeaten run to nine games and climbing to the top of La Liga in the process.

The home side looked bright from the get-go with Vinicius Junior the brightest spark on his return to the Real Madrid starting XI, the Brazilian forcing Diego Lopez into a good early save after a mazy run. 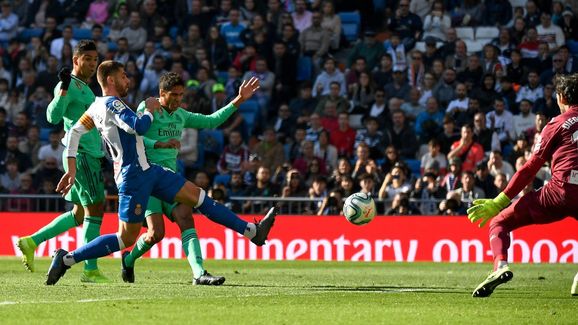 The Real pair then combined for their side’s second, with Benzema latching onto a loose ball before playing a delayed one-two with the Uruguayan, the former smartly finishing past the impressive Lopez for his 11th La Liga goal of the season.

Ferland Mendy’s sending off ten minutes from time didn’t lead to any improvement from the visitors, as Real waltzed home to a 2-0 victory.

While the performance didn’t quite match their stunning all-turquoise attire, Zinedine Zidane will be content with his side’s work on Saturday afternoon.

They were in total control from the outset and were rewarded for their persistence in the opening period through an unlikely source.

It’s fair to say that they dropped off for much of the second half, despite only holding a one-goal lead, and the home faithful were starting to get a little restless as Espanyol began to look a little more dangerous going forward.

However, a Benzema strike after 79 minutes put any nerves at ease and they strolled to the top of La Liga ahead of Barcelona’s clash with Mallorca tonight.

On the whole, it was a crucial win without some of their key stars while the performance of Vinicius, who was electric at times, would’ve also pleased Zidane.

While Vinicius was bright going forward and Casemiro superbly shielded the back four, it was Raphael Varane who was largely responsible for Courtois’ and Real’s easy afternoon at the Bernabeu.

Varane’s defending has been really important today, too. Once again, Carvajal’s positioning has been sloppy, leaving the right side vulnerable and forcing Varane to do a lot of covering for him. Carvajal continues to be inconsistent.

I don’t even remember the last time Varane scored

The World Cup winner was cool in possession amid Espanyol’s high press and was dominant in the air, ensuring that Jonathan Calleri didn’t have a sniff throughout. His speed proved key as well when covering Dani Carvajal – who was often caught out of position – down the right-hand side.

Not only was the Frenchman stout defensively, but he also showed his credentials in the final third – finishing brilliantly for the game’s opener.

Before their home fixture against Real Betis next Sunday, Espanyol take on CSKA Moscow in the Europa League next Thursday. Pablo Machin will likely rest key starters for that one, with his side having already secured their place into the round of 32.