Paris Saint-Germain’s Dani Alves and Real Madrid’s Cristiano Ronaldo appeared to be having a battle of their own on the pitch during the second leg of the last 16 Champions League tie between the two clubs on Tuesday night.

Alves and Ronaldo have been bitter rivals for a number of years, as the pair spent many years going toe-to-toe in Clasico after Clasico, before Alves left Barcelona for Juventus in 2016.

The pair were reunited for last season’s Champions League final, where Madrid defeated Juventus. With the Brazilian now at PSG, their battle continued this week – with Alves appearing to do something pretty weird to Ronaldo during Tuesday night’s clash. 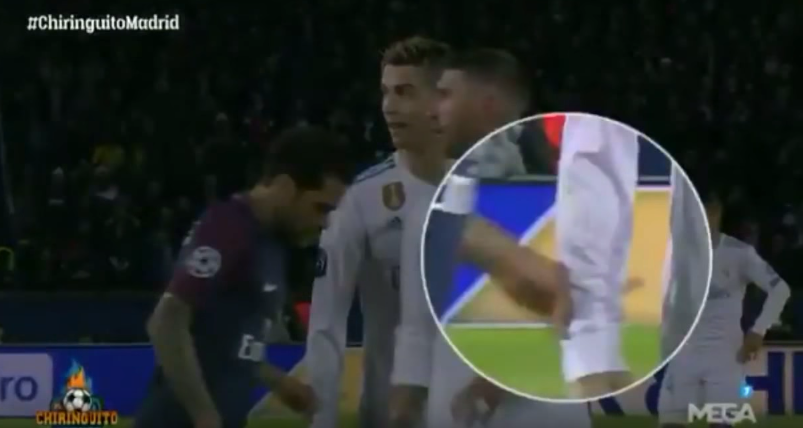 Spanish television station El Chiringuito TV appeared to pick up what looked like Dani Alves wiping his nose with his hand and then wiping said hand on Ronaldo’s sleeve.

Unfortunately for Alves, it was Ronaldo who got the last laugh after he scored at the Parc des Princes to send Madrid through to the quarter-finals. PSG were resoundingly beaten over two legs by Los Blancos to finish 5-2 on aggregate.

​​PSG just can’t seem to cut it in the Champions League. This defeat could spell the end for manager Unai Emery as the club look set to replace the Spaniard. Under pressure Arsenal boss ​Arsene Wenger is said to be in the picture to take over in Paris.

PSG will now look to see out their dominating campaign of Ligue 1 with a title win. The Parisians are 14 points clear at the top of the table and ahead of current champions Monaco. With their talisman Neymar out for the foreseeable future with a foot injury, PSG go up against Metz in their next league game.