​Raphael Varane has confirmed that Manchester United are interested in luring him away from Real Madrid.

The centre-back spoke to Spanish newspaper El Larguero (h/t ​Manchester Evening News) about the supposed interest from the Premier League giants, who have allegedly been tracking him for some time.

Jose Mourinho is a known admirer of Varane’s talents after the pair worked together at Santiago Bernabeu during the former’s two-year reign, and the Portuguese boss is keen to be reunited with the France international at Old Trafford. 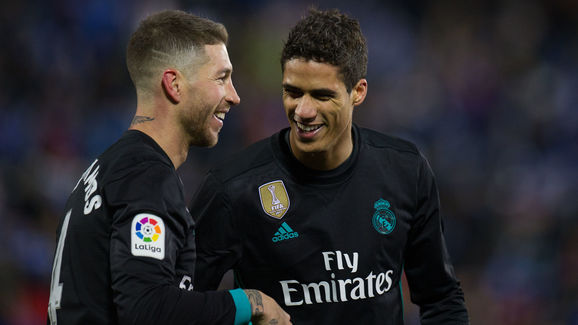 And whilst he gave no indication that he would swap Madrid for Manchester, Varane did reveal that there had been ‘contact’ between his agent and the English heavyweights.

Mourinho is on the lookout for a central defender to partner Eric Bailly in the heart of his backline after he grew tired of the poor displays from England duo Chris Smalling and Phil Jones.

I want Real Madrid to win the CL again, CR7 to get his 6th ballon for and then for varane and Kroos to say they need a new challenge and come to man utd

Reports in the media earlier in March had claimed that Mourinho was eyeing four new recruits in the summer and a new defender was a top priority as he sought a way to make his team much more solid at the back.

Victor Lindelof has also failed to impress since his big-money move to Manchester, while Marcos Rojo has been plagued by injuries over the past couple of seasons and cannot be relied upon regularly.

That has led to Varane and Barcelona’s Samuel Umtiti being linked with switches to the north west of England and, if the former did move, he would link up with Romelu Lukaku under Mourinho.

Man Utd need to sign a world class centre-back if they want to compete with Man City. I’d be kicking Real Madrid’s door down for Varane if I was them. #CRYMUN

The 24-year-old added that he felt the Belgian striker was the toughest opponent he had ever faced during his professional career and would be happy to be on the same side as the marksman for once.

Varane added: “I feel more comfortable with fast players because I try to control the depth. For my qualities, it’s what I prefer. Lukaku, for example. He is the strongest forward in the world. It is pure power. You have to play differently. I try to be more complete to annoy any striker.”