​According to reports (via ​fichajes.com), Real Madrid are set to reignite their long-standing interest in AC Milan centre-back Leonardo Bonucci this summer.

Despite the 30-year-old only just signing for AC Milan from fellow Italian giants Juventus in July, this has not put Real off of making a move for the Italian international, with Madrid president Florentino Perez eager to acquire reinforcements for his team’s back-line. 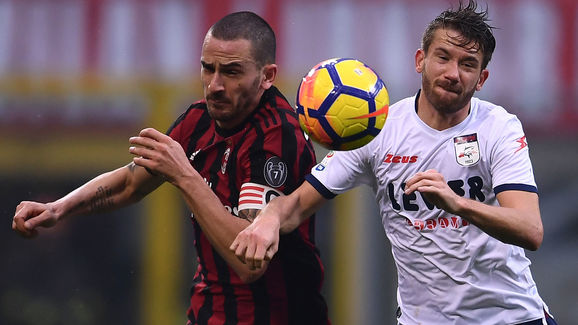 It is little surprise that Madrid are looking to bolster their defensive ranks, having conceded 30 league goals so far this campaign, more than double of the amount of goals conceded by rivals Barcelona and Atletico Madrid, who have shipped 13 and 12 league goals respectively.

It would seem unlikely that Milan will allow Bonucci to depart the San Siro after just one season, but technical director Massimiliano Mirabelli may be forced into playing his hand in order to comply with UEFA’s Financial Fair Play rules.

Milan oversaw a giant financial overhaul last year which saw them make a number of big-money signings last summer which not only saw the arrival of Bonucci, but also the likes of Ricardo Rodriguez, Andre Silva and Hakan Calhanoglu. Milan may have to sacrifice one of these players so they don’t get penalised by European football’s governing body, which could give Madrid the green light to move for Bonucci.

The former Juventus man could be swayed by the advances of Madrid. Milan’s new-look side have so far struggled to gel this season, where they find themselves sitting in a mediocre sixth-place, five points off of the top four.

They were knocked out at the last-16 stage of the Europa League by Arsenal in midweek, which seemed to be a more realistic route for them to make a return to the Champions League next season.

However, Milan will have the chance to play for some silverware when they face Juventus in the final of the Coppa Italia in May.

(You May Also Be Interested In, ‘​Gialuigi Buffon Believes Leonardo Bonucci is Regretting Move His to AC Milan‘)

Bonucci is not the only defender that Madrid are keeping tabs on. Perez and his recruitment staff are reportedly keeping a close eye on Chelsea defender David Luiz, Inter’s Milan Skriniar and Sevilla centre-back Clement Lenglet, who had a big part to play in his side’s recent Champions League triumph over Manchester United.