Cristiano Ronaldo reportedly ​placed a bet on himself as he told his Real Madrid teammates that he will finish the season as La Liga’s top scorer back in November – and he could now actually go on to do it.

According to Marca back in November, when he had scored just one league goal and Lionel Messi had scored 12, ​Ronaldo made a bet with his teammates that he would be the league’s top scorer. Four months later Messi has 25 and Ronaldo is creeping up on him with 22.

The bet was made on a week where ​Real Madrid won 3-0 against Las Palmas but Ronaldo was not on the scoresheet. Instead Casemiro, Marco Asensio and Isco were amongst the goals as Los Blancos secured a good victory.

​Ronaldo’s recent run of impressive form has seen him leap up and just behind Lionel Messi in the race for the Pichichi, as the Portuguese captain sit on 22 goals as his four goals against Girona means he’s only three goals behind the Argentine skipper (25 goals).

Whilst the comeback to be closer to Messi is impressive, it’s actually meant that Real Madrid trail their fierce rivals by more points, as they were eight points behind the unbeaten Catalan club then and are now 15 points behind them in third place. 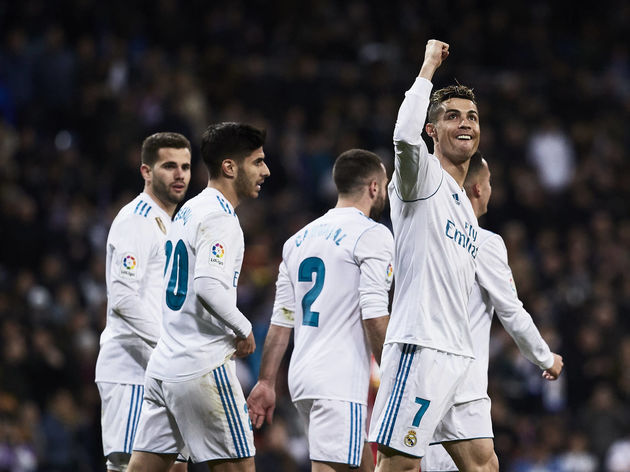 Despite Real’s lackluster form in La Liga this season, it’s impossible not to be in awe of the former Manchester United man’s recent form – ​with the four goals on Sunday meaning he’s now scored 18 goals in his last nine league games.

In this impressive vain of form it’s rather impossible to rule Real out of winning a third successive Champions League trophy – which is the only viable honour the men from Madrid can still get their hands on – and as impossible to rule Ronaldo out of walking away with his fourth Pichichi trophy. Real Madrid return to action with an away game at La Palmas on the 31st of March as club football takes a break with the international break to be served until then, and with Ronaldo in the form he is currently in it would be crazy to rule Zinedine Zidane’s team out of an incredible third consecutive ​Champions League triumph.

​Real Madrid have been draw against Juventus in the Champions League quarter finals, in what will be a repeat of last season’s final – a match where ​Ronaldo and his Real teammates certainly stole the show.