In this eagerly anticipated repeat of the 2016/17 Champions League final, Juventus will take on Real Madrid at the Juventus Stadium on Wednesday night in the first leg of their quarter final clash.

Despite Juve’s apparent status as ‘over the hill’, it perhaps unsurprising to see the Old Lady once again continue to defy their age. Indeed, while Madrid are ostensibly the favourites, such an experience and hardened side would not have been Zinedine Zidane’s chosen opponents, far from it in fact. Both had the required confidence boosting domestic victories over the weekend, with three goal hauls all round ensuring they’ll both go into the game in Turin in an appropriately potent mood.

As alluded to, the pair have a remarkably even record against each other, with the Spanish side just edging the Italians by nine wins to eight, and two draws in their 19 competitive clashes.

While I would love to be able to cite last season’s final as our classic encounter, unfortunately it was far from it, as Juventus succumbed to Real’s attacking prowess with little resistance in the second half at the Principality Stadium. No, for a truly classic game we head back to the 2002/03 semi final second leg. After infamously beating Manchester United 6-5 on aggregate in the quarter finals, with that astonishing hat-trick from Ronaldo, Los Blancos were in fervent form.

They took this confidence into the first leg at the Bernabeu, triumphing 2-1. However, 12 minutes in, their advantage was cancelled out by David Trezeguet, after some tenacious work by Del Piero to reach an overweighted ball with his head, knocking it back for the frenchman to dispatch into the net. 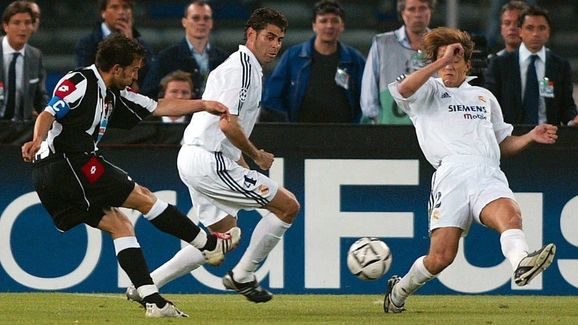 The Italian maestro then doubled the Old Lady’s advantage, with another dextrous piece of work. This time he killed a high looping ball with a sumptuous first touch, then feigned inside and out before slotting it into the near corner.

It was then the turn of the first of the two recurring cast members this time out, to have their say on proceedings. First up, was Gianluigi Buffon, who’s penalty save from Luis Figo in the 67th minute was perhaps the most critical moment of the entire encounter. 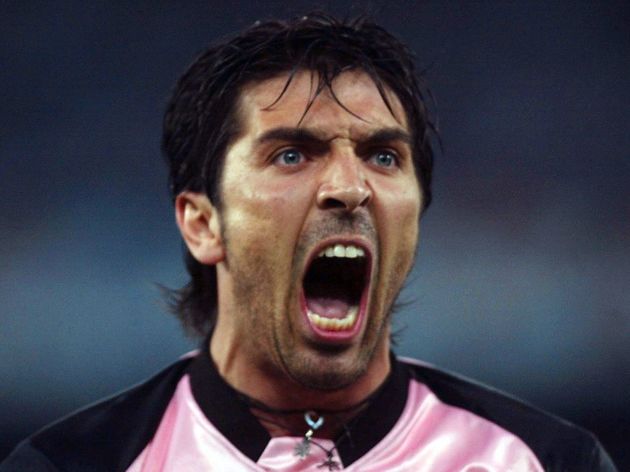 The save reinforced his side’s belief, and just six minutes later Pavel Nedved settled the tie, with an expertly taken half volley from a clipped ball from Zambrotta. There was still time though for the second survivor, Zinedine Zidane, to make his elegant mark on the ocassion, as he capped off a wondrous performance with a typically classy consolation finish.

Of course it wasn’t enough to prevent Juventus from meeting AC Milan at Old Trafford, for the first (and last) all Italian European final.

Record over the last 10 games across competitions:

As is customary at this point of this season, the Bianconeri have gone undefeated in their last 10 games, although the draws against Tottenham at home, and a stalemate away at SPAL have shown their fallibility.

Real have a similarly imperious record, with both wins against Paris Saint-Germain in the Last 16 showing they’re still the most dangerous side in Europe. However, the ignominious loss against Espanyol that blots this record, as well as various defensive lapses throughout, are cause for concern.

Madrid’s clean bill of health was dealt a blow on Saturday, when Nacho Fernandez came off in the early stages of their clash with Las Palmas. The defender is now a doubt for Tuesday night, but Isco and Sergio Ramos have both returned to training, and should be available.

Juventus, meanwhile, are far more laden with absentees. Alex Sandro is expected to miss out after sustaining a hamstring injury over the international break, and Federico Bernardeschi remains out indefinitely.

Additionally, both Miralem Pjanic and Mehdi Benatia are ruled out through suspension, while Mario Mandzukic faces a race to be fit after his thigh injury. In more positive news, Juan Cuadrado made his return to action against Milan, and should be in line for selection.

As is so often the case, so much of this tie depends on Cristiano Ronaldo. The forward has scored in every single Champions League game so far this season, with an incredible 12 from eight games. However, if Juventus can keep him quiet, and strike on the break – following the blueprint of two seasons ago – they could have a chance. Indeed, despite their run of good form, Madrid’s evident uncertainty at the back will provide promise for Massimo Allegri’s side.