​​Real Madrid are purportedly preparing an offer to secure the services of Mohamed Salah from Liverpool, and are ready to put both Isco and €50m on the table.

According to Spain’s notorious pot stirrers ​Diaro Gol, the Spanish giants are desperate to sign the red hot Egyptian, after a disappointing season in La Liga.

Save for Cristiano Ronaldo’s sudden burst into goalscoring form in 2018, which has seen his record rise to an astonishing 39 goals in 36 games after a slow start, Los Blancos have struggled to find goals elsewhere. Indeed, Real’s next highest goalscorer is the apparently insufficient (and therefore intermittent) Gareth Bale, with 14, followed by Marco Asensio with 10 and then Karim Benzema with a lowly nine.

It is therefore clear why, if reports are to be believed, the possibility of signing the 38-goal man Mo Salah is one that has been granted the approval of Madrid’s big three – Florentino Perez, Zinedine Zidane and Cristiano Ronaldo.

(You may be interested in: ​Liverpool Boss Jurgen Klopp Emerges as Number One Target to Replace Zinedine Zidane at Real Madrid This Summer)

Considering the season the 25-year-old winger has had, it’s fair to say the Reds will need to be offered a gargantuan deal to even think about entering into negotiations.

Acknowledging this, Perez has come in with an appropriately priced offer, with playmaker Isco’s value marked at €100m at least. While the Spaniard is highly rated at Madrid, with good reason, he has found it incomprehensibly difficult to retain a consistent place in Zidane’s starting eleven. 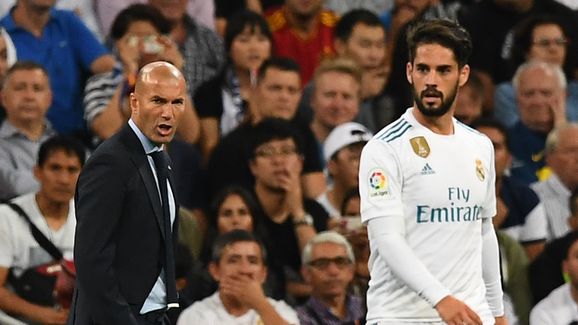 It is this inconsistency, combined with the player himself’s growing frustration with his peripheral status, that makes the 25year-old an expendable asset, in addition to Madrid’s relative travails this season, especially domestically.

However, while any team in the world would benefit from the presence of Isco, it’s hard to see the Merseyside club willingly enter into talks about losing the man who’s remarkable opening season has seen him craft an instant hero status at Anfield.