​Cristiano Ronaldo secured Real Madrid’s progression to the semi-final stage of the Champions League with a stoppage-time penalty against Juventus on Wednesday, saving his side’s blushes after they’d conceded three on the night to leave the Italian side level on aggregate.

With the teams all tied up and heading to extra time, Lucas Vasquez won a penalty after going down in the box, much to the distaste of Gigi Buffon, who was quite livid, earning himself a red card for shouting in referee Michael Oliver’s face.

That is ridiculous. Seriously.

Of course, Ronaldo would be the man to step up, and of course, he buried his spot kick with aplomb.

What led up to the crucial goal, though, was worth noting.

Several minutes passed between the awarding of the penalty and the actual taking, so one could well imagine how nerve-wracking it must have been for the Portuguese star.

And a ​video has since emerged via Spanish football show El Chiringuito, recalling just what he did leading up to the spot kick. Most of you probably watched it on TV, but it would have been hard to notice given the chaos, as well as the magnitude of the moment.

Now that things have quieted down, it’s been realised just how cold Ronaldo was in the moments leading up. Wojciech Szczesny, who came on to replace Buffon in goal after the sending off, scuffed the penalty spot in an attempt to rattle the Madrid forward. 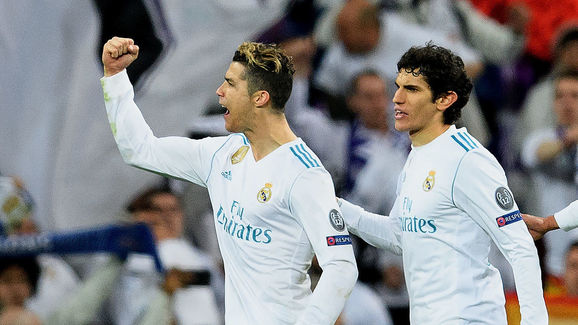 Yet he seemed to take his mind away from everything going on around him, ignoring the melee, as well as his teammates’ words of encouragement while taking some deep breaths to get himself under control.

He only returned to earth when it was actually time to take the penalty, which he rifled past a hapless Szczesny to get Madrid ​4-3 on aggregate and send them to yet another semi-final round in Europe.

The Champions League holders are now set to face Bayern Munich in the net round, with the first leg kicking off on March 25.