​Aged 17 he became a product of the ​Real Madrid youth system, then Emilio “the Vulture” Butragueno was kept on and elevated to the B team in 1982. The hometown boy was leaving his dream, and when he was finally handed his full debut in February 1984, he made sure that his name would be etched upon everyone’s mind.

Behind 2-0 against Cadiz he scored a brace and set up another to seal a memorable comeback and a quite remarkable debut. From then on, there was no looking back.

In just his second full season, 1984-85, he helped Real Madrid win the UEFA Cup. The signs were there that Madrid were coming back onto the European football map. During that season he earned his first full cap for the Spanish national side, this coming after he went to the previous summer’s European Championship Finals in France, but didn’t get any game time. 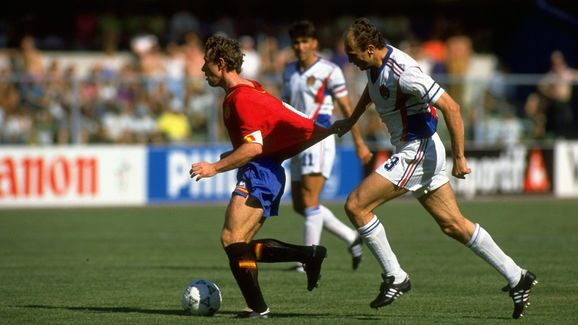 Leading up to the 1986 World Cup in Mexico, he had scored 32 goals in 101 appearances for Real, and in helping Spain to the world biggest tournament, he bagged four goals in the warm up games leading to the summer event.

After a disappointing home World Cup in 1982, going on tamely in the second-round group phase, the Spanish were looking to put that behind them with a more positive display in Mexico.

They had a young squad in terms of experience, 10 players had yet to reach double figures in appearances, but they were led by 30-year-old captain Francisco Jose Camacho, a teammate of Butragueno. In total there were seven Real Madrid players in the squad of 22, the most from any La Liga teams.

In the second pot of seeds they were always going to be handed a tricky group such was the growing strength of the competing nations. They landed in Group 5 with Brazil, then Algeria, and Northern Ireland, who both had very different stories from the last World Cup. Indeed, it was the Irish that upset Spain and caused them to have a harder second phase. The opening game was in Guadalajara under intense sunshine. Brazil were, as always, one of the favourites to lift the cup, so this was to be a good marker. Unfortunately, the Vulture had his wings clipped and couldn’t get any joy from a well organised defence. Socrates scored the only goal of the game to put immediate pressure on Spain, as the Algerians managed a 1-1 draw with Northern Ireland. Brazil then beat Algeria with a single goal, leaving the door open, but next up was a revenge game against the Green Army.

Having been kept at arm’s length by Brazil, Butragueno was determined to get his World Cup started, and in the first minute against the Irish, he did just that. A delightful through ball put him through on the edge of the box and his shot went low into the far corner of the net. A great start got even better on the 20th minute mark when he turned provider with a lovely assist, winning the ball on the corner of the area and sliding a pass to Salinas, who subsequently fired home.

The ghost of ’82 was being exorcised, and despite getting a goal back just after half time, Ireland couldn’t repeat their upset performance from four years before. Brazil rattled three goals past Northern Ireland to go through as group winners, meaning Spain faced Algeria in a straight shootout to qualify for the second round. Algeria had good pedigree but couldn’t live with the Spaniards, as Spain won 3-0. With some heavy challenges going in Butragueno was taken off at half time, they couldn’t afford to risk the striker with more important games coming up.

Denmark had blown away their group opposition to make the next round, a 6-1 win over the tough Uruguayans made the world sit up and take note. They followed this up with a 2-0 victory over West Germany. They were exciting and confident. They were everything that Spain needed. The Vulture was ready to strike.

18th June: the last of the second-round knockout games was held at the Estadio La Corregiodora in Queretaro. In the late afternoon sun, it was the Danes who struck first, a very harsh penalty given just after half an hour, which Jesper Olsen coolly dispatched.

Momentum was clearly with the Scandinavian team but then on the stroke of half time the tide started to turn. With no real danger a sideways no look back pass was swiftly pounced on by Butragueno to slide home. It was a goal from nothing, but showed the strikers great speed and presence of mind. Spain were back in the tie, and after the break played a near faultless half of football.

Ten minutes into the second half, Spain won a corner. It was lofted to the edge of the area and nodded into the danger zone where Butragueno was criminally left unmarked four yards out to steer his header home.

As he celebrated in front of the large number of Spanish fans behind the goal, you could sense the Danes wilting in the heat. Just a dozen minutes later it was 3-1. A long ball played from just inside their own half had the striker on his way again, he was goal side of the defender and was unceremoniously brought down. With the referee pointing to the spot he grabbed the ball and wanted to complete his hat-trick. Andoni Goikoetxia had other ideas however, and duly smashed the spot kick home. The Vultures day was far from done, and the Spanish were now flying.

With ten minutes to go another flowing move down the right, the Vulture now in his element swept into the middle unmarked to knock in his third and the fourth for Spain, it was as easy as it was sublime. Still, there was time for one more goal. Butragueno was now toying with the Danish defence, turning and jinking. Then with the ball at his feet, on the left side of the area he performed his own Cruyff style turn and was too quick for his marker who hacked him down.

This time he was literally handed the ball by his colleagues. Rewarded for his hard work and to become only the sixth player to score four goals in one World Cup finals game, the first since 1966. The ball was put firmly to the left of the keeper and history was made. Butragueno had halted the remarkable Danes, and in doing so put himself in the spotlight as well as making his team a favourite to win it all.

Sadly, for him and the passionate Spanish fans, the euphoria was short lived. They went out to a well organised Belgium team on penalties, and it was another case of what might have been.

Emilio Butragueno went on to become a legend at Real Madrid scoring 123 goals in 341 appearances, helping to establish the team as one of the giants of the game in Europe, winning six league titles 95 consecutive from 1986-90) and a couple of Copa del Rey trophies. His International career ended in 1992 after netting 26 times in 69 games.

Gary Jordan is the author of ‘Out of the Shadows: the Story of the 1982 England World Cup Team’ published by Pitch Publishing. You can follow him on Twitter at @gazjor1.