Fresh from securing their third Champions League final in a row, Real Madrid travel to recently crowned Spanish Champions Barcelona, as Ernesto Valverde’s men look to get closer to finishing the season unbeaten in La Liga.

Lionel Messi’s 46th career hat-trick in a 4-2 victory over Deportivo de La Coruna helped seal Barcelona’s seventh league title in the last decade, and they can become the first team in La Liga history to go a season unbeaten, having already set the record for the longest unbeaten run in the Spanish first division. Traditionally, the next opponents upon clinching a league title form a guard of honour at the start of the match. However, Zinedine Zidane has stated that his side​ will not line the pitch to congratulate Barcelona on their La Liga title when the pair meet on Sunday evening

The last time Barcelona were beaten in the league was against Malaga on April, 8, 2017, whilst the last time Madrid were victorious in an El Clasico was April, 2, 2016.

Despite Madrid’s European domination, they are only third in La Liga, and trail their city rivals Atletico Madrid by four points, and with their game in hand on Atletico, this match-up becomes vital for Zidane, if his side has any chance of clinching second in La Liga. Andres Iniesta announced he will leave the Nou Camp in the summer, and has been suffering with a calf issue of late – but he should be fit to play in his final El Clasico.

Dani Carvajal was forced off in the Champions League semi-final against Bayern Munich and is expected to miss out, whilst Rafael Varane and Isco remain doubtful. The start of the rivalry between Pep Guardiola and Jose Mourinho, six years before they moved to Manchester. In the midst of Barcelona’s golden generation, it was a team that boasted a young Lionel Messi, a prime-time David Villa and the midfield-duo of Iniesta and Xavi, all under the wing of the still relativity inexperienced Guardiola.

A game that established Barcelona’s ‘tika-taka’ as a true phenomenon. David Villa scored twice, and Xavi, Pedro and Jeffren helped complete the humiliation. Things reach boiling point for Madrid, as a scuffle broke out in injury-time, with punches thrown, players going down, and Sergio Ramos sent off.

Here was Barcelona at their very best, as the golden generation cemented their place in history with one of the most dominate El Clasico victories the world had ever seen. 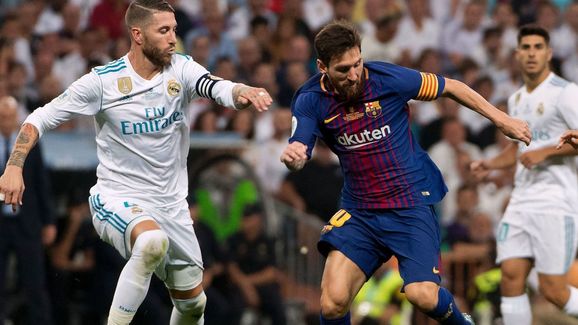 As it so often is the key battle. Lionel Messi leads the way in La Liga with most goals (32) and most assists (12), and the five-time Ballon D’or winner has been, once again, the key-man in Barcelona’s glory.

Messi has developed his game exceptionally well since Luis Suarez came in four years ago, having to play more of goal-scoring-playmaker role, rather than an out-and-out goal-scorer. But with the addition of Philippe Coutinho, the Argentine has began to play further forward again, forcing this famous battle of Ramos vs Messi upon us once again.

The Spaniard will have to be on top form if he is to contain Barcelona’s main man, as he was in mid-week against Bayern.

Both teams go into the match with confidence, as Real Madrid have sealed their fourth Champions League final in five seasons, whilst Barcelona have been unstoppable all season-long in the Primera Division. The Catalan club were convincing winners at the Bernabau earlier this campaign, easing to a 0-3 victory, and the European champions may face a similar situation if they are not at their best here.

This El Clasico tie is mainly about bragging rights, with the title already clinched and Zidane’s men with their sights set firmly on their European quest once again. However, Barcelona should continue their unbeaten record and reign victorious over their rivals once more.