Sergio Ramos had a night to forget as a makeshift ​Real Madrid side were narrowly beaten by Europa League hopefuls Sevilla on Wednesday night.

After a disappointing domestic season for both sides, it was the hosts who prevailed, with Wissam Ben Yedder shining on what was an incredibly entertaining night at the

​Real Madrid dictated the early proceedings, controlling possession as they looked to play the game at their own tempo.

However, it was the hosts who had the first effort of the match as Vasquez fizzed an effort over the bar in the 10th minute.

Real Madrid were in trouble again just minutes later as Sergio Ramos had to react quickly to get across and block what looked like a promising effort on goal from Vasquez. 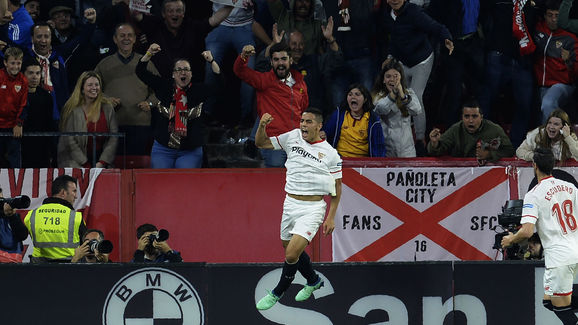 Following this, Real Madrid had their best spell of the first half with youngster

It was not just Real Madrid who were wasting their opportunities, however, as some superb individual trickery from Ben Yedder was undone after Layun shanked his shot into the crowd behind Kiko Casilla’s goal. This was a warning for Real Madrid which was not not heeded as Wissam Ben Yedder broke the deadlock half way through the first half. Luis Muriel rose highest to win a long ball which was  pumped up from the back by Pareja and he nodded the ball into Ben Yedder’s path. The Frenchman spun away from Sergio Ramos to slip the ball beyond the helpless Casilla.

Real Madrid seemed stunned by the goal, with the makeshift side struggling to gel as they looked for a way back in to the match. They continued to control possession but struggled to penetrate the well drilled Sevilla defence.

Sevilla, whose recent form has seen them win just once in their last eight matches, were just inches away from doubling their lead after Nacho was able to clear a deflected effort from Muriel off the line following a scappy few moments in the Real Madrid box.

This didn’t deter the hosts as they compiled Madrid’s misery on the stroke of half time after former Stoke City man Steven N’zonzi capitalised on a defensive mix up to lay the ball off to Miguel Layun who had virtually the whole goal to aim for as he stroked the ball into the roof of the net.

Los Blancos had it all to do as they kicked off the second half and they started brightly with Lucas Vasquez having a pop from distance, only to see his effort narrowly rise over the woodwork.

The game really kicked into life after Chance after chance went begging for the visitors who had only previously lost two La Liga fixtures since the turn of the year. Both Ramos and Benzema fired shots over the Sevilla goal and these efforts were followed up by Casemiro who failed to test Soria in between the sticks.

Ramos’ miserable evening was rounded off after he deflected a Mercado effort beyond his own keeper, accrediting an own goal to his name when on another night he could have grabbed himself a handful of goals.

This third goal looked to practically put the game to bed, Real Madrid’s fighting spirit did not waver as they looked to achieve the impossible. They grabbed themselves a first consolation goal after a delicious cross from Asensio was met by substitute Borja Mayoral.

Incredibly the action did not stop there as Madrid were awarded a second penaltyof the match in the fourth minute of added time after an off the ball incident between Mercado and Theo saw the Madrid man hit the deck. Ramos stepped up again and made no mistake on this occasion as he sent Soria the wrong way.

It proved too little too late however, as Real were unable to find an equaliser in what was an incredibly disappointing night for Zinedine Zidane’s men.