Lionel Messi has conceded it “would be terrible” if former ​Barcelona teammate Neymar joined ​Real Madrid this summer, as the five-time Ballon d’Or winner voiced his opinion on the furious speculation surrounding the Brazilian’s future.

Neymar famously departed Barcelona for Paris Saint-Germain in a record-shattering €222m transfer that left many in in Catalonia and La Liga devastated. However, despite picking up Ligue 1 and Coupe de France trophies in his first season with PSG, there has been near-constant reports linking Neymar with a sensational return to Spain.

Real Madrid president Florentino Perez is a known admirer of the 26-year-old Brazil star, while ​reports from Spain have talked of a campaign to court Neymar – whose prospective price tag in the press ranges from €260-400m – as he recovered from a footy injury in his homeland. While ​recent reports claim incoming PSG boss Thomas Tuchel has been given assurances over the future of his star player, speculation continues to rage and Messi has admitted he has even spoken to his former attacking teammate about it.

​The Argentina captain told TyC Sports channel programme ‘Libero’ (via ​Sport): “It would be terrible [if Neymar moved to Madrid] because of everything he means to Barcelona.

“Ney won important trophies here. He won the Champions League [and] La Liga [titles]. It would be a huge blow for everyone. 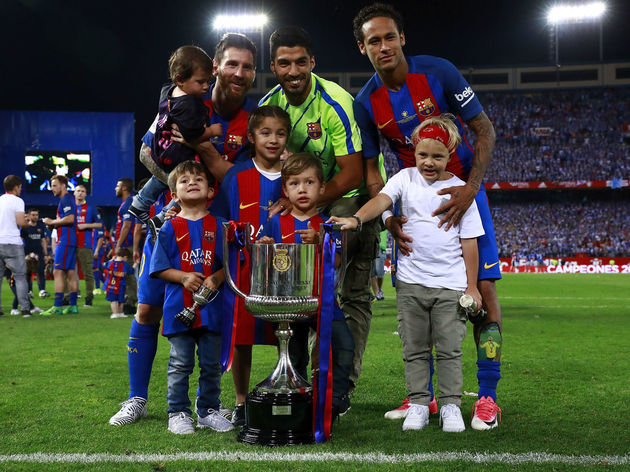 Messi also admitted signing Neymar “make Real Madrid even stronger from a football point of view”, before adding of the rumours, “I speak with him, so he already knows what I think.”

Neymar, who formed one third of the ‘MSN’ trident alongside Messi and Luis Suarez at Barça until last summer, recently said that the thing he most misses from his time in Spain is the friendship with his two attacking teammates.

Speaking in an interview with Canal Zico 10: “The friendship that we had was something very beautiful. What I miss from Barcelona and about Barcelona is these two [Messi and Suarez], due to the joy we had on a daily basis.”

Should Real Madrid wish to actually deliver the ‘huge blow’ to Messi and their rivals at Barcelona, they may have to get past the Emir of Qatar. Tamim bin Hamad Al Thani, the owner of PSG, ​is reported to be the main road block in their pursuit of Neymar, as he values the Brazilian as a major asset in image-building for the club and Qatar as a nation.