Before the first ball

In fact, it was probably one of precious few facts most already knew about any

In December 2015, Cheryshev scored his first competitive goal for ​Real Madrid in a routine 3-0 win over Cadiz in the Copa Del Rey round of 32. It should’ve been a proud moment for the winger, born in Nizhny Novgorod but raised in Spain, who had worked his way through Real’s B team to the fringes of the Galacticos set up alongside Cristiano Ronaldo.

However, his goal – a powerful finish after a neat piece of control – was not the story. It turned out no-one from the player himself to coach Rafa Benitez to president Florentino Perez realised that Cheryshev wasn’t actually eligible to feature in the game.

The Russian had picked three yellow cards in the Copa the year before while out on loan, and was technically suspended for the win over Cadiz. The farcical admin error resulted in Real Madrid being expelled from the tournament, with the career of Cheryshev – the first Russian born player to appear for Real Madrid – being (until this summer) reduced to a pub quiz answer for fans around the world. Easy to dismiss as just another not-quite-good-enough player to pass through the Real Madrid system and fail to make the grade, albeit with a rather bizarre asterisk next to his name, Cheryshev’s back story is actually a lot more intriguing.

Almost uniquely for a Russian player, Cheryshev has spent his entire professional career outside of Russia, and the man himself self-identifies as Spanish, having moved to his adopted country at the age of just five when his father

He has said of his national identity (via ​El Pais): “I feel half Russian and half Spanish, I was born in Russia and in my house we speak Russian, but I grew up here [in Spain]. Even though my character is Russian, rather cold, my behaviour is Spanish because I like very much to talk to people” Along with his social gregariousness, Cheryshev’s Western education in football gave him a fast-track to the Russia national team, with Fabio Capello and the FA making an early play to ensure the rising star listened to his Russian half at international level.

While Russia was crying out for a player with the technical abilities gleaned from years training under some of the best coaches on the continent and playing in one of the world’s best leagues, they weren’t so keen on

After an ill-fated loan spell at Sevilla in the run up to the last World Cup, Cheryshev missed out on Capello’s 23-man cut, but was taken along to Brazil for the experience. However, two years later the same generosity was not extended for Euro 2016. With ‘Copa-gate’ still fresh, it was the worst period of the winger’s career.

It would be neat to be able to say that Cheryshev came on leaps and bounds in the last two years and that a stunning season with Villarreal made him an obvious pick for new coach Stanislav Cherchesov, when heading into the World Cup on home soil. However, in reality, Cheryshev’s inclusion in the final squad raised a few eyebrows, after an underwhelming if not disastrous 2017/18 campaign with Villarreal. The one-time Galactico hopeful had faded into obscurity.

With optimism from the home support at an all-time low, few would’ve been surprised to see Cheryshev warm the benches of his homeland – playing second fiddle to Alan Dzagoev, as he had done for Ronaldo before – as Russia crashed out after three games.

He got his chance to when Dzagoev’s hamstring gave out midway through the World Cup curtain raiser against Saudi Arabia. While a forced change, rather than a tactical one, Cheryshev – although too humble to admit it himself in the post match interview – was a perfect substitute for the moment and added pace, drive and two mean finishes to a Russian side, who appeared to be lacking an end product to a dominant spell. Already transformed into an undisputed started by the Egypt game, he added the killer second goal, as the hosts romped to the knockout stages. 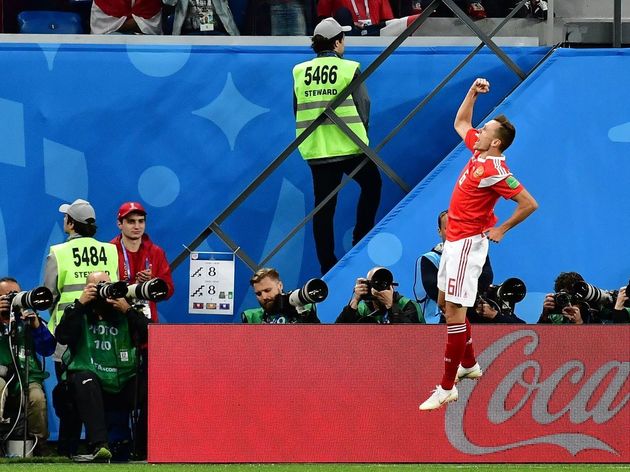 After two games, Cheryshev now has two Man of the Match trophies, three goals and has been the unlikeliest star of the first week of the tournament.

He is even a very early contender for both the Golden Boot and Ball. Perhaps his biggest rival for both is the man who inadvertently stopped his Real Madrid career from ever getting started – Ronaldo.

The two could yet face off in the last 16. Cheryshev, humble to a fault after receiving his second Man of the Match award, revealed he would give the trophies to his parents as he didn’t need to look at them anymore.