Brazilian midfield enforcer Casemiro has boldly claimed that ​Barcelona star Sergio Busquets is the best central midfielder in the world.

Despite Busquets playing for the fiercest rivals of Casemiro’s ​Real Madrid, the midfielder has heaped praise on the Spanish defensive midfielder.

Casemiro stated that he has an admiration for Sergio Busquets, who he believes is the best defensive midfielder in the world. pic.twitter.com/BuC7PHtyHX

​“There are not many players that I can choose from in my position but if I had to pick one then it would be Busquets,” Casemiro told a press conference, per ​Marca.

“He is the best in the world and I have a lot of admiration for him, he has a lot of quality. Kante and Pogba are also very strong.”

Brazilian star Neymar has not been allowed to flourish during this tournament, with defenders being particularly aggressive in their attempts to stop his play. However, Casemiro insists that Neymar is capable of looking after himself and doesn’t need help from any of his teammates. “He doesn’t need anyone to protect him,” he said.

Neymar was overcome with emotion when he scored his first goal of this summer’s World Cup in the 97th minute of Brazil’s ​second group game against Costa Rica.

It is his only goal of the tournament to date, as he languishes well behind the likes of ​Harry Kane and ​Cristiano Ronaldo in the goal scoring charts. 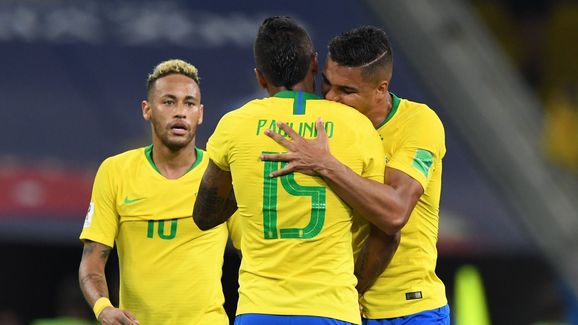 Brazil will now face Mexico in the last 16 on Wednesday and will be hoping that Neymar – who has disappointed massively so far – can hit his form at just the right time.