The news comes after ​Spain were knocked out of the ​World Cup at the round of 16 stage, following a dramatic penalty shootout defeat at the hands of host nation Russia.

Iniesta: “Today is my last match with National Team. A wonderful stage is over & sometimes endings are not as one wants.” pic.twitter.com/gAG7eOtcFr

Speaking in a post-match interview, Iniesta told reporters (via ​Gianluca di Marzio) that he had hoped for a better ending.

“It was my last game with the national team, a wonderful story ends here, even if not as I hoped.

“It’s a difficult time, we’ve already experienced it in the past, and we’ve proven ourselves good at going beyond things, we’ve always stood up to the circumstances and, even if I hoped for a better ending, we have to accept that football is this also”

The 34-year-old scored 13 goals for the Spanish national team in an illustrious 131-cap career for his country. He was part of Spain’s ‘golden generation’ that won the European Championships in 2008 and 2012, and was also the scorer of the 116th minute winning goal in the 2010 World Cup final against the Netherlands.

He was also named in the UEFA Euro All-time XI, which was announced in 2016. He will certainly go down as one of the greats of the game, particularly for the success he had in the heart of that Spanish midfield – particularly with former Barcelona teammate Xavi.

Iniesta left Barcelona at the end of last season, and it has subsequently been announced that ​he will join Japanese outfit Vissel Kobe on a two year deal. 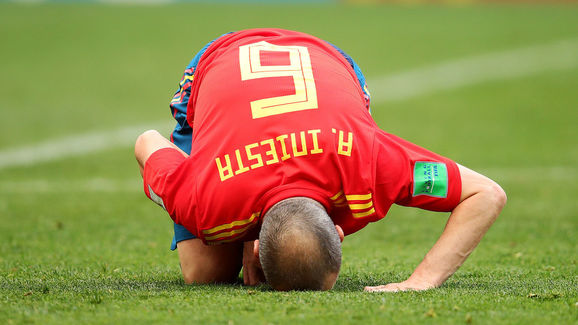 Vissel Kobe are owned by the owners of Rakuten, who are the main shirt sponsors of Iniesta’s former club, Barcelona.