There was huge team news for Russia as their best player of the tournament, Denis Cheryshev, was dropped the day after denying allegations from his father that he had been taking banned substances. Mario Fernandes came into the team in place of the suspended Igor Smolnikov, with Aleksandr Golovin and Yuri Zhirkov also returning.

Spain made three changes, with Andres Iniesta one of the players dropped. Nacho, Koke and Marco Asensio came into Fernando Hierro’s side.

38 – Sergei Ignashevich is the oldest ever player to score an own goal in a World Cup match (38y 352d). Oops. #ESPRUS #RUS #WorldCup

Spain dominated possession in the opening exchanges and got their reward in the 12th minute. A crude foul from Zhirkov allowed Asensio to whip in a dangerous free kick and in the process of trying to wrestle Sergio Ramos to the ground, Sergei Ignashevich inadvertently deflected the ball into his own net.

Spain settled into a comfortable but tedious passing rhythm, though they were nearly caught out when Golovin found space on the edge of the box and sent an effort just wide of the upright. Roman Zobnin forced a corner off Koke as well as the hosts started to play themselves into the game. 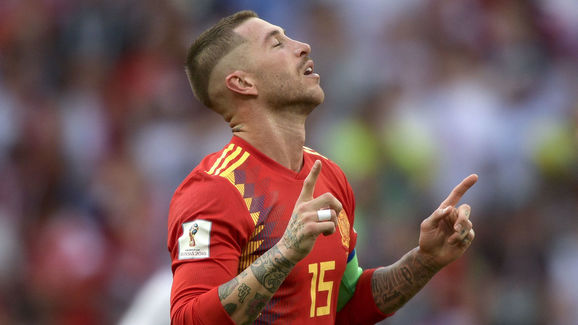 From that corner, Russia were literally handed a route back into the game as Artem Dzyuba’s header struck the outstretched arm of Gerard Pique for an obvious penalty. Dzyuba stepped up with confidence and dispatched the spot kick beyond David de Gea for an unlikely equaliser.

That injected some urgency into Spain’s play and they nearly reclaimed the lead as a pin-point through ball found Diego Costa, who forced Akinfeev into an important save. The half time whistle came as a relief to Russia, who saw very little of the ball in the first half but went in on level terms.

Russia made a change at half time, with Vladimir Granat replacing Zhirkov.

A bouncing ball in the Russian box threatened another Spanish goal soon after the break, but Jordi Alba hit it awkwardly with his knee and it looped into the grateful hands of Akinfeev. A dangerous run from Isco forced Russia into some last-ditch defending.

The hosts showed their intent as Cheryshev was introduced in place of Aleksandr Samedov to a great reception from the crowd inside the Luzhniki Stadium. Another attacking player, Fyodor Smolov, was also brought on in place of the goalscorer Dzyuba.

Spain responded with their first changes as Andres Iniesta came into the action in place of David Silva and Dani Carvajal replaced Nacho at right back. With no chances forthcoming, Iago Aspas became the third sub as he replaced the anonymous Costa.

Spain came close to grabbing a winner five minutes from time as a low strike from Iniesta was pushed away by Akinfeev, with the follow up shot dribbling across the face of goal with nobody on hand to apply the finish touch.

Some lax passing in midfield nearly gifted Russia with a rare chance, but Smolov chose the wrong pass and Golovin was closed down before committing a foul. Spain couldn’t carve out any more openings and the match became the first of the World Cup to go to extra time.

Spain’s doing a great job protecting the lead it does not currently possess.

A long-range effort from Koke summed up Spain’s frustration as the Russians continued to hold their shape. The hosts were the first to make the additional sub allowed under the new rules, bringing on Aleksandr Erokhin for Daler Kuzyaev.

Asensio found some rare space on the edge of the box but Akinfeev was untroubled but a shot straight into his midriff. That was his last significant action as

That was the last drama of extra time and with thunderstorms providing a fittingly dramatic soundtrack, the match went all the way to penalties.