​Cristiano Ronaldo will embark upon a new chapter in his illustrious career this season after joining ​Juventus in a €100m deal.

It means that his ​Real Madrid career is at an end after nine glorious years.

During that he time he set numerous incredible records in La Liga, the Champions League, for Real as a club and as a player in world football.

Here’s a look at 14 impressive benchmarks he has set since 2009. Across all competitions, Ronaldo scored 50 or more goals for Real every season from the 2010/11 campaign through to the 2015/16 campaign. Most Goals in Madrid Derby Matches

Ronaldo scored 18 times for Real Madrid in games against city rivals Atletico, netting in the most recent clash in April. No other player has scored as many goals in this derby.

Most Goals for Real Madrid in El Clásico Matches

This is a Real club record that Ronaldo shares with Blancos legend Alfredo Di Stefano after scoring his 18th goal against Barcelona in the 2-2 draw between the club in May 2018. No player in La Liga history has scored more hat-tricks than Ronaldo, who has netted 34 trebles over the last nine years. The first of those came in May 2010 against Real Mallorca. Most Goals Scored in a Single Champions League Season

Ronaldo fired Real to La Decima in 2013/14, scoring 17 goals in the Champions League that season, an all-time record in the 63-year history of the illustrious competition.

Ronaldo set this record just last season in 2017/18 when he scored home and away for Real against APOEL, Tottenham and Borussia Dortmund during the opening stage of the competition. Ronaldo has been the top scorer in the Champions League every season from 2012/13 campaign right through to the 2017/18 campaign, a record he has the chance to keep extending.

Ronaldo has scored four times in Champions League finals over the years, three times with Real. He scored once in 2014 against Atletico and twice in 2017 against Juventus Most Goals Scored in the Champions League

Ronaldo’s Champions League goal tally of 120 is a competition record. He scored the first 15 of those for Manchester United, with the remaining 105 scored in only nine seasons with Real.

Most Ballon d’Or Awards Won by a European Player

He won his first with Manchester United, but Ronaldo’s five Ballon d’Or awards is more than the three that Marco van Basten, Michel Platini and Johan Cruyff managed in their careers. When Ronaldo won his second European Golden Shoe in 2010/11 as the continent’s top league scorer, he was the first player to have won it playing for clubs in two different countries.

Most Goals Scored for Real Madrid

Ronaldo finished his Real Madrid career with a club record 450 goals. He broke the previous record held by Bernabeu icon Raul in October 2015 when he scored his 324th goal for the club. 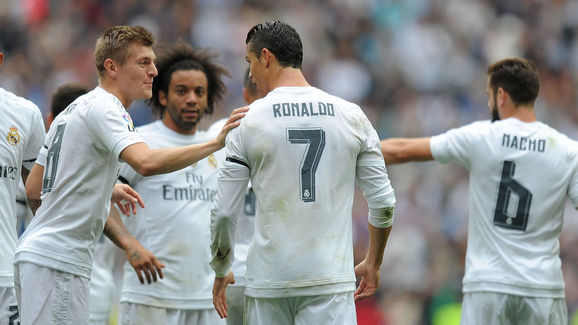 More records surely now lie ahead of him at Juventus…