Real Madrid defender and Champions League winner Sergio Ramos has responded to Liverpool coach Jurgen Klopp’s latest jibes with a few barbs of his own – by digging out his recent record in major finals.

The two have been engaged in a war of words since Real’s 3-1 Champions League final win over the Reds in May, with Klopp taking particular issue with two incidents involving the Spaniard during the game. His foul on ​Mohamed Salah – which ended the Egyptian’s involvement in the showcase in Kiev – and apparent elbow on Loris Karius, which caused a concussion, have been Klopp’s particular points of contention. The two moments were key to Real winning the game, and while Ramos has claimed both were accidental, Klopp hasn’t seen it that way.

Over 500,000 ​Liverpool fans haven’t either, as they actually signed a petition for the match to be replayed, but Klopp has called out Ramos in two separate press conferences in the last couple of weeks.

​At the end of July, Klopp said: “I do not expect that from him, I only expect that he gives more thought to his assessment of certain situations.

“Many people will say that these things happen. But if that is the message we are sending to our children, that nothing is out of bounds and it’s all about winning, then I will be glad to leave this planet in 40 years.

“Am I a good loser? No. But during our preparations we had to talk about Ramos because he had influenced the final the previous year with a dive and a red card against Juventus.” 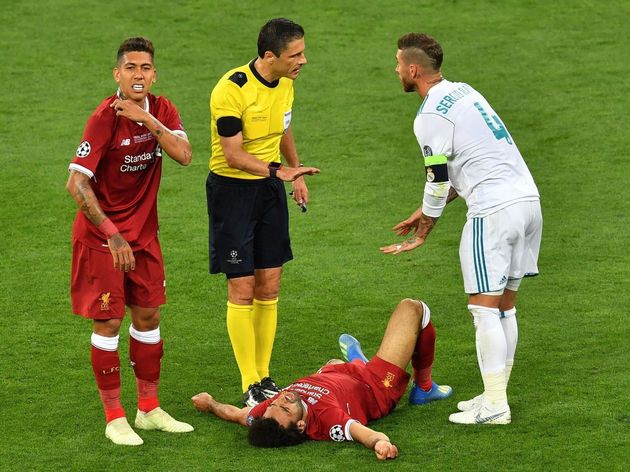 It’s not the first final he’s lost, [maybe] he wants to use that as an excuse for losing.

“There have been many repercussions after what happened to Salah in the Champions League final. Let Klopp worry about his own players.