Borussia Dortmund loanee Achraf Hakimi insists that he is fully focused on life in Germany and that he hasn’t been thinking about the chances of returning to parent club Real Madrid next season.

The 19-year-old joined the Westphalian outfit on a season-long loan from Los Blancos during the summer, following his impressive displays at the World Cup with Morocco. The Madrid-born full back has had to be patient for a chance with Borussia Dortmund’s first team, but Hakimi repaid manager Lucien Favre’s faith in him by scoring on his Bundesliga debut as a stand-in for Lukasz Piszczek against FC Nürnberg.

Hakimi insists that he is now desperate to push on with Dortmund to ensure that he has “the best possible future” as a professional footballer, adding that returning to his boyhood club hasn’t come under consideration so far this season.

“At Real Madrid, I’d already had to compete with Dani Carvajal, who is the best right-back in my opinion. To compete with Piszczek is another significant challenge because he has also been one of the best for some time,” Hakimi told Marca. “I will try to learn from him.

“Real Madrid are my team, who I supported, but it isn’t something I’m thinking about at the moment. I only think about developing and working out well with Dortmund to have the best possible future.”

Hakimi also explained how former teammate Carvajal talked the youngster into a move to Germany this summer, with the four-time Champions League winner sharing his past experience at Bayer Leverkusen with his understudy at Real Madrid.

“Yes, it is something that I thought about when coming here. I thought that it had helped Carvajal a lot that he came to play in Germany at such a young age,” Hakimi added. “He told me to make the most of it to improve, earn minutes and, above all, to enjoy the experience.” 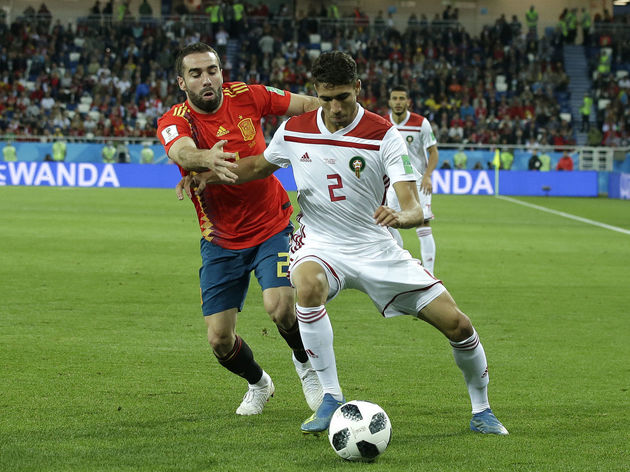 The Morocco international could be in contention to start for Borussia Dortmund when they take on Leverkusen on Saturday. Die Schwarzgelben know that picking up three points at the BayArena will see them overtake Bayern Munich at the top of the league table.