The incident went unnoticed by the officials during the game, but social media users quickly vilified Ramos, accusing the defender of deliberately ‘stamping’ on England’s star while he was on the floor in the penalty area. The 32-year-old was already a divisive figure in England as many Liverpool fans believed he deliberately sought to injure Mohamed Salah during the Champions League final in May.

But Ramos has now hit back at his critics, posting a video on Twitter that appears to exonerate him of any wrongdoing, along with the caption ‘Nothing else to say.’

It was the long shot that appeared to show a ‘stamp’. But the close up footage from a different angle posted by Ramos shows Sterling already clutching his leg before the Spaniard approached him and offered no evidence of a stamp or any other obviously deliberate violent conduct. 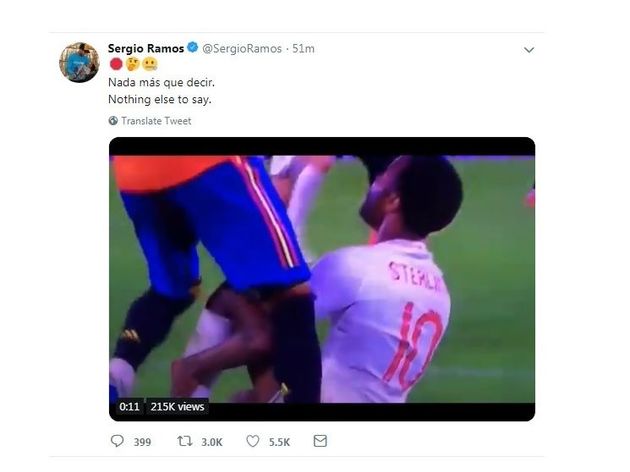 The only ‘contact’ between the players was a slight clip of the boots as Ramos skipped over his already stricken opponent, who scored twice on the night.

Sterling netted England’s first and third goals to help put the visitors 3-0 up at half-time in Seville, his first two international goals for three long years. Paco Alcacer pulled one back for Spain, while Ramos himself made it 3-2 in the eight minute of stoppage time.