Word in Spain is that Real Madrid boss Julen Lopetegui’s days in charge of Los Blancos are numbered. And, according to one publication, the former Spain manager could be relieved of his position in a matter of hours.

The leading candidate being touted as his replacement is Chelsea 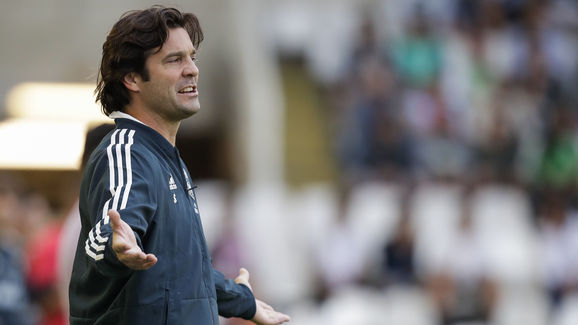 Solari, meanwhile, works as the Castilla coach (Madrid’s B team) and has the team in second place in Segunda B’s Group 1. Marca claims that the 42-year-old Argentinian is viewed as a higher priority than Conte.

It is understood that Madrid will look to promote Solari in the wake of Lopetegui’s departure (much like Zinedine Zidane was bumped up after Rafa Benitez was axed) until June and consider offering him the managerial position full time based on results. Former Paris Saint-Germain coach Laurent Blanc is also thought to be on Madrid’s shortlist, while ​Tottenham’s Mauricio Pochettino is reported as being the chief option for a summer appointment.

However, Spanish football expert Guillem Balague has cited information from TJ Cope, claiming that Lopetegui will not be fired this Sunday and Los Blancos are leaning towards a more experienced replacement like Conte.

Nothing will happen with Lopetegui today (via @tjcope and Paco González). Santi Solari doing a great job (more than a dozen of his last two young Castilla squads are now 1st or 2nd Division players) but they are looking for a more senior manager (Conte considered)

The Italian won the Premier League title and the FA Cup in his two years at Chelsea, but his fractious relationship with the Blues board saw him fired during the summer.