Real Madrid keeper Thibaut Courtois has issued a vehement denial over the claims of his negative reaction to the news of either Jose Mourinho or Antonio Conte potentially replacing Julen Lopetegui.

The ex-Spain boss is understood to be close to receiving his marching orders from Los Blancos following their shockingly poor start to this season, and reports have claimed that either one of the former Blues bosses could take over. Courtois worked under both Mourinho and Conte at Chelsea, having joined Real from Stamford Bridge during the summer under controversial circumstances.

According to Spanish source El Pais, the keeper was livid after learning one of his former coaches could take over from Lopetegui soon.

I left London to not have to go through something like that again and now it turns out that Conte comes, and if not, Mourinho.”

Courtois has since tweeted out a statement denying he said the above, also claiming he’s considering legal action.

“I emphatically deny the information published today in @elpais_deportes regarding me. Include lies that hurt me as a professional and I expect a rectification by meditating on taking legal action,” the player posted on Twitter.

Conte, meanwhile, is said to have come to an agreement with Chelseaover his contract. It was previously reported that Madridwould have to pay the Blues £10m if they hired the Italian, who is still contractually tied to the London side. 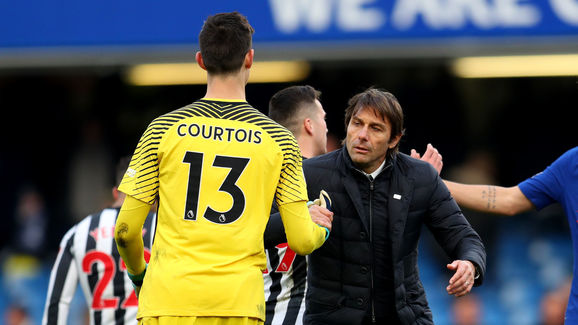 But, according to a report from Sport Mediaset (H/T Football Espana), the manager has agreed over a settlement with the club he led to Premier League success in 2017 and will be free to join the Spanish club if they come knocking.