The pressure on Julen Lopetegui was increased to a dangerous degree as a Luis Suarez-inspired Barcelona ran out 5-1 victors against ​Real Madrid in Sunday’s Clásico.

Barcelona began on top and their efforts were rewarded after just ten minutes as Jordi Alba’s cross was converted by Philippe Coutinho to give his side the lead. Ernesto Valverde’s side remained dominant and were awarded a penalty after VAR spotted ​Raphael Varane’s trip ​on Suarez, and the Uruguayan converted to double Barcelona’s lead ahead of half time. 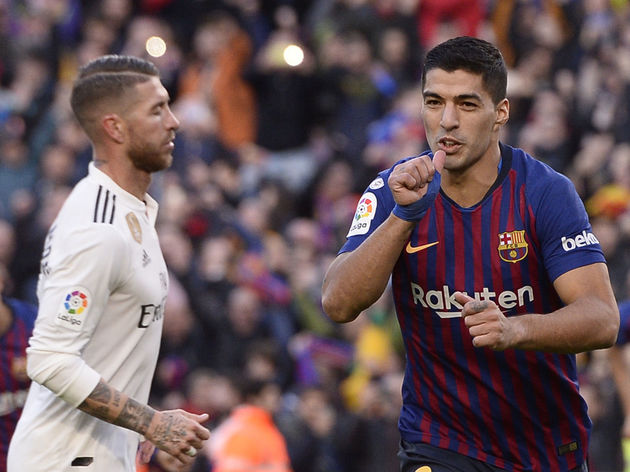 ​Marcelo pulled a goal back for Real soon after the restart, the visitors were almost level shortly after as ​Luka Modric struck the post. However, despite the huge improvement from Real, Suarez once again found the back of the net with 15 minutes to go with an impressive header.

He completed his hat-trick shortly after, breaking behind Real’s defence before executing a delightful chip over ​Thibaut Courtois. ​Arturo Vidal made it 5-1 shortly after as Real – despite showing improvement for a large part of the second half – slumped to an embarrassing defeat.

Even with Barcelona’s sublime squad, many speculated that they would struggle without ​Lionel Messi. But they are quickly reminding us why they are one of the world’s strongest teams.

Once again, it was ​Rafinha who was tasked with filling in for the Argentinian, with ​Ousmane Dembele forced to watch from the sidelines for the majority of the match. Dembele was introduced in the second half and was instrumental in two of Barcelona’s second-half strikes, which could well save his career at the Camp Nou. Truthfully, almost every member of Barcelona’s squad stepped up. Alba was a stunningly-effective option on the left wing, whilst Suarez and Sergi Roberto were dominant in all areas of the field. Yes, they would prefer to have Messi available, but they will be just fine without him.

Could it be anyone else?

What a stunning performance from Suarez. When he wasn’t scoring goals, he was tormenting Barcelona’s defenders with his phenomenal movement. However, it was his ability in front of goal which will be remembered most. He was the one to win the penalty for his side, before calming slotting the ball past Courtois. Even as Real improved, Suarez remained committed and did not stop in his attempts to score goals. His second goal was a superb header, before an expertly-executed chip ensured Barcelona would walk away with bragging rights.

It was a sublime performance from Suarez, and fans were eager to praise the left back on Twitter.

Luis Suarez showed up in the first El Classico in a decade without Lionel Messi and Cristiano Ronaldo, been absolute astonishing in Messi’s absence. He really stepped his game big time.

WHAT A HEADER FROM LUIS SUAREZ!!!

Given the phenomenal performances from the majority of Barcelona’s players, Lenglet’s below-par display was made all-the-more obvious. There was nothing too awful from the Frenchman, but he looked nervy throughout and it was his deflection which allowed Marcelo to grab the goal for the visitors. However, certainly nothing to be concerned about.

Julen Lopetegui. This is the talking point.

With Dani Carvajal out injured, Lopetegui opted to field Nacho at right back instead of Alvaro Odriozola, but his decision completely backfired. Nacho looked uncomfortable out wide and was completely dominated by Jordi Alba and Coutinho, who played a huge part in Barcelona’s two goals. Things looked incredibly bleak for Real, but it was his decision to switch to a 3-5-2 which proved to be the catalyst for Real’s improvement. Real terrorised Barcelona during the second half, and Valverde’s men had no idea how to defend against them. They were unlucky not to draw level, before being completely overwhelmed later in the match.

Real’s second-half performance was exactly what fans have been looking for. They will be disappointed with the end result, but the improvement from the entire squad was sublime.

Still – they did fall to a 5-1 defeat. There’s surely no surviving this.

Marcelo’s performance was a perfect representation of Real’s display. During the first half, he was rarely involved as the entire team were extremely poor. However, the second half was different. The Brazilian was back to his dominant self as he moved into a more advanced role. His incredible attacking positioning was instantly on show as he netted Real’s goal just five minutes into the second half, and he constantly looked a threat until he was forced to leave the field through injury.

Fans jumped on Twitter to praise him, and deservedly so.

Marcelo ran himself into the ground again. The one man who never gives up, who always gives us hope, who always provides us with that offensive spark. Marcelo is Madridismo.

I’ll take the L, Barca far superior than us. Real Madrid need to pull off an absolute miracle to save our season. But who will step up, only one who deserved to wear the shirt today was Marcelo.

Nacho was a centre back playing as a right back in the first half, and he looked very uncomfortable doing so. He left far too much space between himself and his fellow defenders and allowed Alba, Coutinho and Suarez far too much space behind him. Certainly not good enough from the Spaniard.

Barcelona will hope to carry their momentum over into a Copa del Rey clash with Cultural Leonesa on Wednesday, before getting back to ​La Liga action against Rayo Vallecano on Saturday.

For Real Madrid, they will be desperate to recover in their cup clash with Melilla, before welcoming Valladolid to the Bernebeu on Saturday. However, they may do so without Julen Lopetegui.