​Real Madrid have apparently broken off talks with Antonio Conte about the former Chelsea and Juventus manager succeeding Julen Lopetegui at the Santiago Bernabeu.

Los Blancos’ president Florentino Perez has had his finger poised on the trigger to dismiss Lopetegui for some time, with the current manager seemingly signing his own death warrant after a humiliating 5-1 Clásico defeat on Sunday.

That defeat followed a record-breakingly bad start to life as Real Madrid manager, leaving his position near untenable and his dismissal a question of when rather than if. 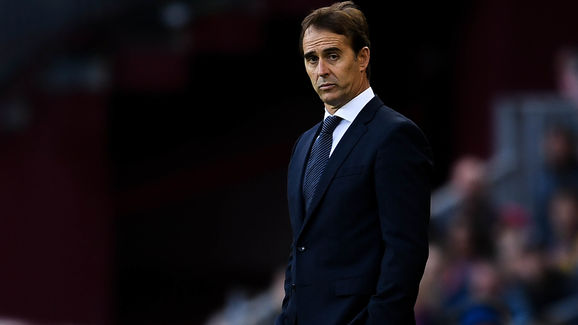 With Lopetegui’s exit imminent, ​upon reaching a contract settlement with his last club, Chelsea, last week.

However, despite the free run at Conte, who has four Scudetti and a Premier League title to his name, ​Onda Cero now report ​Real Madrid have broken off with the 49-year-old former Juventus boss.

Onda Cero claim that Los Blancos have “broken off negotiations with him [Conte]”, while Santiago Solari – the current Real Madrid Castilla coach – is set to take over first team duties in the short-term.

On the subject of the interim period, Onda Cero claim: “[Solari] is going to take over the team momentarily until there is a new coach.

“He will lead the match against Melilla, Valladolid and in Champions League against Viktoria Plzen. The dismissal of Julen Lopetegui is scheduled for the next few hours.” While Real Madrid found success after appointing Zinedine Zinedine from within back in 2016, following the dismissal of Rafa Benitez, Solari represents a leap of faith for Los Blancos’ hierarchy due to his lack of first team experience.