Santiago Solari has admitted Real Madrid needed the win as they edged a spirited Real Valladolid side 2-0 at the Santiago Bernabeu.

After a sustained spell of pressure in the first half, Madrid had nothing to show for it as they struggled to breakdown their opposition and both sides went into the half-time break goalless. 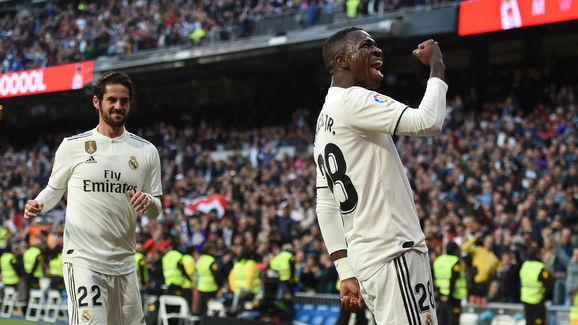 It was the visitors who came out stronger in the second half and gave Solari’s side two real scares after they hit ​Thibaut Courtois’ crossbar twice in quick succession. Ultimately Vallodolid were made to pay after Vinicius Junior – who came on as a second half substitute – made an inspiring impact and put his side ahead thanks to a deflected effort with seven minutes left.

​Sergio Ramos then made sure of the points two minutes from time after Karim Benzema won a penalty for ​Los Blancos, which the captain duly dispatched. Speaking to the club’s ​official website, Solari admitted it was a much-needed win for Madrid and praised his side’s patience to snatch two late goals. He said: “Real Madrid needed the win. In a tough moment, it can be hard to win well and the game was a real challenge, tight, and scrappy, with a lot of counters. The boys were focussed today, driven right up until the end.

“These are true professionals, with real experience and we all need to keep our emotions in check, even though we had some hair-raising moments in front of 80,000 fans. Before the game, I admitted it was important for the players that the fans get behind them. “At times, the fans did that today. The group did fantastically well, they showed patience, managed the game well, did not lose shape and persevered to win.”

The win brings an end to a run of five ​La Liga games without a win for Madrid, with Vinicius coming off the bench and inspiring his team to a win. Solari went on to insist he’s not concerned about the increased levels of publicity surrounding the youngster, whilst also revealing he told the youngster to be bold prior to bringing him on in the second half. He added: “I’ve told Vinicius to be bold, to take people on defend doggedly, he knows all of this and he doesn’t need me to tell him. I’m not worried by the euphoria surround him. Us footballers can’t fight against what’s going on in the press or among fans. He’s got his whole career ahead of him and any assessment will have to be made in twenty years’ time.”

Solari will no doubt be delighted after winning his first La Liga game in charge of Los Blancos, and will be hoping to make it back-to-back wins when they take on Viktoria Plzen in the Champions League on Wednesday night.