​Eibar came within inches of opening the scoring in remarkable fashion, as Kike hit a dipping first time volley crashing off the post with Thibaut Courtois well beaten in an open start to the game.

Real Madrid then found themselves frustrated by excellent last-ditch defending as the in-form Karim Benzema dinked over Asier Riesgo before seeing his effort blocked on the line.

Kiké provided Santiago Solari, appointed as Madrid manager on an 18-month contract last week, with a further reminder of the threat posed by Eibar on the break though Madrid again left themselves exposed from a corner as their hosts took a well deserved lead. Barcelona loanee Marc Cucurella raced away to square for Gonzalo Escalante who swept home after ​Courtois’ initial block. 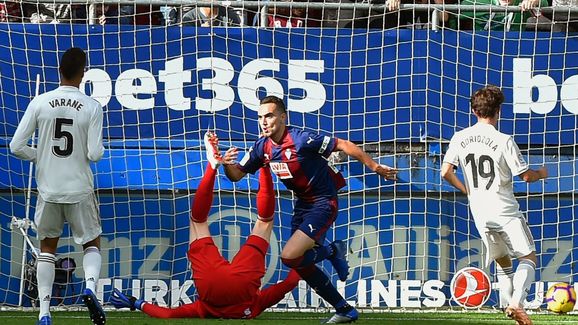 Eibar then ran rampant following the interval. Cucurella was again creator in chief as he dispossessed Odriozola to set up Sergi Enrich, who fired beyond Courtois with aplomb. Minutes later Mendilibar’s side extended their lead to three as Kike prodded into an empty net to heap further misery on Solari’s side.

​Madrid sought a route back into the game, though were wasteful in the final third as Benzema was caught offside on countless occasions. Courtois spared his side further embarrassment as he swatted away the impressive Fabian Orellana’s curled effort.

Despite impressive performances against Alaves and Valladolid in their last two outings, many would’ve seen victory over Madrid as a step too far for José Mendilibar’s men. The Spaniard will be delighted by his side’s relentless pressing and clinical edge as they dominated a lethargic and careless Madrid side. 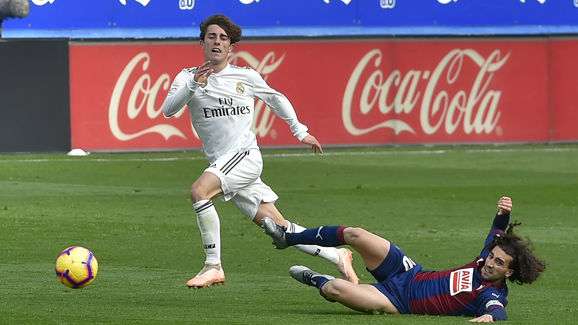 While Madrid were poor, Eibar forced mistakes from Los Blancos on countless occasions, and have shown that a more enterprising and expansive approach against La Liga’s biggest side’s can pay dividends. In Cucurella, Eibar have secured the albeit temporary services of a quality player, and must make the most of the Barcelona youngsters talents for the duration of the season.

Cucurella demonstrated why he so highly thought of by his parent club in an all-action display down Eibar’s left flank. The speedster assisted Eibar’s opener and their second as he caused the equally youthful Álvaro Odriozola a host of problems in defence for the visitors.

Cucurella’s intelligent pressing kept Madrid honest in possession in a scrappy performance which will have frustrated the newly appointed Solari, who sought his fifth consecutive win at the club.

Eibar’s performance as a whole was very impressive, and manager José Mendilibar will take a lot of confidence from his side’s display. The only concern for the Spaniard will be the ease at which Karim Benzema was able to get in behind Paulo Oliveira, in particular, on numerous occasions with the Portuguese defender caught ball-watching at times.

Since Julen Lopetegui’s dismissal following that abysmal performance in El Clasico, Real Madrid have won all four of their games with Solari rewarded for his side’s upturn in form with an 18-month contract at the Bernabeu. Saturday’s performance, however, was one of Madrid’s worst all season, and bore all the hallmarks of a side lacking confidence and identity.

Many believed Madrid had shaken off their early season struggles, though Eibar’s pressing game uncovered a frail rearguard that had seemingly become far more resilient under the Solari. The Spaniard will need time, though it is alarming how quickly last season’s Champions League winners have slumped to mid-table obscurity in a matter of months.

In a dismal showing from Los Blancos, ​Marco Asensio looked to probe and penetrate Eibar’s back line and delivered a number of dangerous crosses, though ultimately the winger’s end product remained short of his usual high standards.

Dani Ceballos looked all at sea in the first half, and struggled to impose himself on proceedings after the break. The former Betis youngster found himself bypassed by Eibar’s efficient counterattacks on numerous occasions, and struggled to beat the relentless press from the hosts. When he did manage to get his foot on the ball, his passing was either wayward or lacking ambition. A day to forget for a midfielder for whom so much is expected in the future.

Solari’s Madrid face a potentially crucial midweek fixture in the Champions League against Roma, with both sides level on nine points in their group before taking on fellow La Liga strugglers Valencia.
Eibar will look to add a further victory to their recent unbeaten run of four games as they take on second from bottom Rayo Vallecano.