Real Madrid guaranteed themselves top spot in their Champions League group as they overcame a careless Roma side thanks to goals from Gareth Bale and Lucas Vazquez.

With both sides already through to the knockout stages and top spot in Group G on the line, the shackles were well and truly off with the game starting at a frenetic pace.

Eusebio Di Francesco’s side should have taken the lead before the break as Under, after impressing in the early stages, as he smashed over the bar from no Calamitous defending from former Spurs defender Fazio gifted Madrid the lead after the interval as he headed into the path of ​Gareth Bale, who calmly passed the ball beyond the reach of Olsen to the disbelief of Di Francesco.

Lucas Vazquez then added a second as he tapped in from ​Karim Benzema’s header, with the hosts throwing men forward in search of an equaliser, to kill off any hopes of a Roman revival.

Di Franscesco’s future at Roma has come under scrutiny in recent week’s despite club director, Monchi stating he still believes in his manager. Roma have struggled for consistency this term in Serie A and find themselves in seventh place after a disappointing defeat to Udinese last time out. For all their domestic troubles though, Di Francesco’s youthful side, particularly in midfield up against seasoned veterans Modric and Toni Kroos, caused Real Madrid problems from the outset.

Solari’s side struggled with the Italian’s tempo and pressing throughout which will be a concern for the Argentine. Di Francesco must ensure his players put in a similar shift against Inter on Sunday, in a job that could well decide his fate at the club.

Nicolo Zaniolo grew into the game in only his eighth appearance for Roma. The teenager showed nice touches in possession and was unlucky not to open his account as Carvajal blocked his goal-bound strike. Federico Fazio gifted Madrid the opener when his side had looked to be in the ascendancy. The Argentine showed in his time at Tottenham that he is capable of making unnecessary errors, and once again a lapse in concentration undermined an otherwise solid showing from the 31-year-old.

With the loss at Eibar fresh in the minds of many Real players, nerves at the Stadio Olimpico were to be expected from Santiago Solari’s side, and they were evident from the get-go. Thibaut Courtois was fortunate to see his wayward pass in the opening exchanges go unpunished with young midfielder Marcos Llorente – playing in place of the injured Casemiro – bailing his keeper out. Solari will be concerned by his side’s inability to maintain possession at the back under pressure. On numerous occasions Ramos and Varane were caught dallying on the ball and were forced into hurried clearances or inaccurate passes. On another day Di Francesco’s side could’ve been away and out of sight by half time.

Marcos Llorente playing in the holding role for ​Los Blancos excelled. The young midfielders awareness and reading of the game was evident in the first half as he shut down numerous Roma attacks. With Casemiro the only natural holding midfielder in Real’s first team set up, Llorente showed he is more than capable of filling in for the Brazilian when needed. 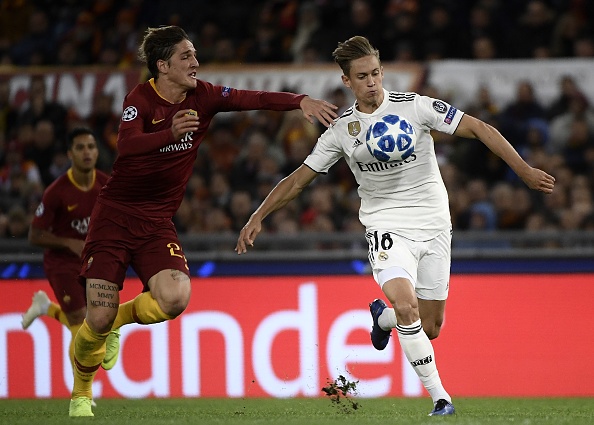 Worst Player
Despite scoring, Lucas Vazquez struggled to impose himself on the game. The wideman looked rusty on his return to the starting XI and gave the ball away needlessly in the first half, though to his credit provided energy down his flank.
Looking Ahead
Roma face a crucial game on Sunday in Serie A as they host Inter, in a game that could be pivotal in deciding the future of under fire manager Di Francesco.
Real Madrid meanwhile take on fellow La Liga strugglers Valencia at the Bernabeu as they seek to bounce back from their embarrassing defeat to minnows Eibar last weekend.