Real Madrid recovered from their embarrassing defeat to Eibar in their last league outing with a hard fought 2-0 win over Valencia at the Santiago Bernabeu.

There was a weight of expectation at the Bernabeu prior to kick off given Madrid’s recent run of results, but a lot of that pressure was lifted just eight minutes in. After Karim Benzema miscontrolled the ball in the box, some neat play from Dani Carvajal kept the ball alive before the Spaniard’s inviting cross was headed into the Valencia goal by their own defender Daniel Weiss. There was a hint of fortune about the goal, however nobody could take anything away from the superb skill shown by Carvajal to set up the goal. Madrid saw out the rest of the first half unscathed and it looked as though it would be a routine victory for Santiago Solari’s men heading into the break, but it proved to be anything but that.

Valencia came out for the second half fired up and created a number of golden opportunities to get themselves back on level terms. Unfortunately for them, they couldn’t take any of them and they were ultimately made to pay when Lucas Vazquez tucked the ball home from 12 yards out with seven minutes left to wrap up the win for ​Real Madrid. It was a very important win for Real Madrid, however it was far from convincing in what proved to be a tale of two halves. They were very impressive in the first half, looking comfortable in possession and well organised in defence whilst also posing a big threat going forward. However in the second half, they faced a rejuvenated Valencia side. 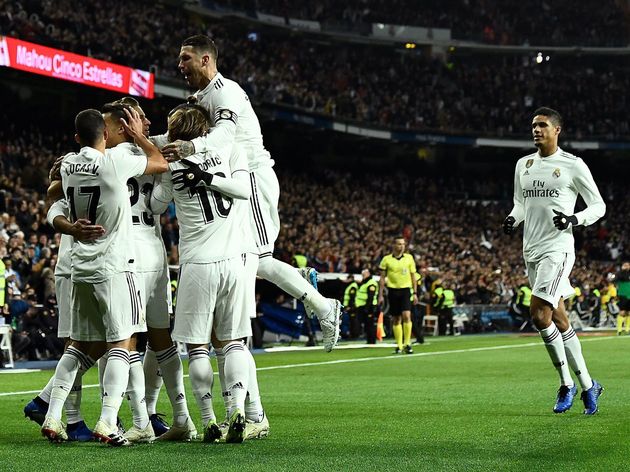 Madrid were on the back foot for much of the second half with visitors piling the pressure on, creating a number of golden opportunities. It was always going to be a tough game for Real given the fact Valencia hadn’t conceded in any of their previous four away games whilst losing just two games all season, but the Madrid defence stayed strong and saw out the game.

There are still a lot of questions to be answered by Solari’s team, but he’ll just be delighted his side were able to earn all three points and stay within touching distance of the top four in ​La Liga.

STAR MAN – There were a number of heroic displays at the back for Madrid, but Carvajal was the star man on the night. It was his neat play which set up the opening goal of the game to put his side in command and he continued to be a big threat going forward down the right hand side.

Carvajal is definitely man of the match, best game for him this season 

Vazquez, Benzema, Llorente, Reguilon, Modric, Ceballos & Courtois all had such an amazing game too 

Not only was he effective going forward, he provided some much needed defensive support to his team when they were on the ropes. A good all-round performance from the Spaniard, who will be very satisfied with his work on the night.

WORST PLAYER – Whilst Madrid will be delighted with the win, ​Gareth Bale will be disappointed with his performance on the night. His place in the starting lineup has been called into question in recent weeks given the team’s poor form coinciding with Bale’s lack of goals in La Liga in recent weeks. He more than anyone would’ve been determined to prove to Solari he deserves to start, however he struggled to make an impact when his team needed it, and his poor night was ultimately ended early in the second half after he was subbed off to whistles from his own fans. He did himself no favours, and will be determined to put in a better showing next time around.

Madrid will look to continue their surge up the La Liga table when they travel to face the league’s bottom side SD Huesca next Sunday afternoon, whilst Valencia will be looking to bounce back after the loss when they host Sevilla on Saturday afternoon.