​Real Madrid and Croatia midfielder Luka Modric has ended the Messi-Ronaldo duopoly on the Ballon d’Or, becoming the first player since Kaka in 2007 to beat either to the prestigious award.

Modric had a stellar season with Real Madrid in 2017/18, winning the Champions League for the third successive year, before being awarded the World Cup Golden Ball in the summer for his efforts in Croatia’s run to the final.

The 33-year-old topped a 30 player shortlist that included Manchester City’s ​Kevin de Bruyne and Liverpool’s ​Mohamed Salah, as well as Messi and last year’s winner Ronaldo among others, to claim the prize 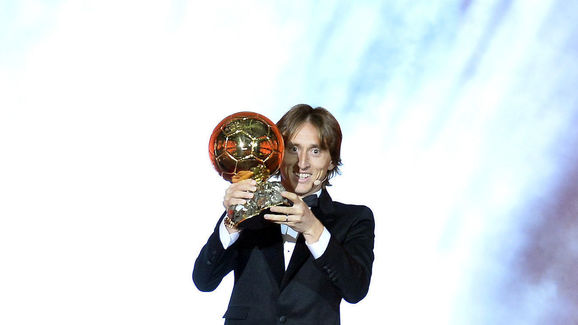 He was presented with the award at France Football’s ceremony in Paris, and leaves Ronaldo and Messi tied at five awards apiece after impressive individual seasons.

Elsewhere at the ceremony, Lyon’s Ada Hegerberg won the first ever Women’s Ballon d’Or while PSG’s Kylian Mbappe picked up the Kopa award for best U-21 player.

You can see the list of nominees, and how they placed, below.