​Jose Mourinho has dropped a huge hint that he’d be interested in returning to Real Madrid as manager by describing the prospect as a “tremendous honour” on Thursday.

Despite saying he “would not feed” the rumours that have grown since his sacking from Manchester United last month, the 55-year-old went on to definitely feed the rumours in an interview with ​Record. Speculation is rife over the Real job at the moment, with Santiago Solari struggling for positive results in the wake of Julen Lopetegui’s departure in October. 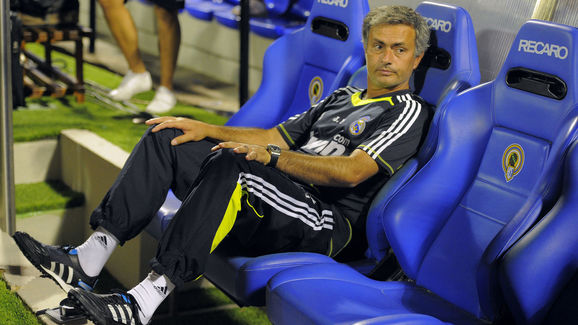 Solari was initially instated until the end of the season following a heavy 5-1 defeat to Barcelona, but Real fell to a 2-0 home defeat to Real Sociedad at the weekend to leave them fifth in the table – and outside the Champions League places.

Wary of missing out on the tournament next season, it’s been rumoured that Real will look to the Portuguese – a former manager of Los Blancos, of course – in the coming weeks or months to attempt to steady the ship. Whether Mourinho is actually capable of doing that remains to be seen.

Mourinho and Tottenham manager Mauricio Pochettino are the front-runners for the job when ​Real do make a decision on Lopetegui’s long-term successor, but the latter is not available at the moment and is likely to cost more than £40m to get out of his contract in north London.

It does suggest that Mourinho actually stands a chance of returning to Santiago Bernabeu, and reports over the last few days have even suggested they moved for him following Lopetegui’s dismissal – and while he was still at United. He turned down the approach at the time, but circumstances have obviously changed.

​Mail Online report that Mourinho is free to take another job after his compensation package of £15m was paid to him by ​United immediately following his dismissal. There are no longer any ties to Manchester, and it looks as though Jose already has his eyes on his next move.

He said on the prospect of returning: “They are things that are said and I will not feed. Chelsea

Mourinho on Real: “When a coach or a player comes back, it means we did something positive. I felt it when I returned to Chelsea.

“When a professional is invited to return, it is a tremendous honour. If they invite you, it’s because they know the value of that person.”

“When a professional returns or is invited to return to a club, it is a tremendous honour. It’s not a gamble in the dark, the clubs are trying to hire a player or a coach they know because they’ve already been there. If they invite you, it’s because they know the value of the person.”

While he may be keen on Madrid, Mourinho has however ruled out a return to his homeland to manage Benfica by describing it as a