Real Madrid left it late to defeat Real Betis 2-1 on Sunday evening, sending them up to fourth in the La Liga table in the process.

Los Blancos started the game brightly and took just 13 minutes to open the scoring. Luka Modric scored his first La Liga goal of the season with a vicious strike into the top corner when the ball rebounded into his path after Dani 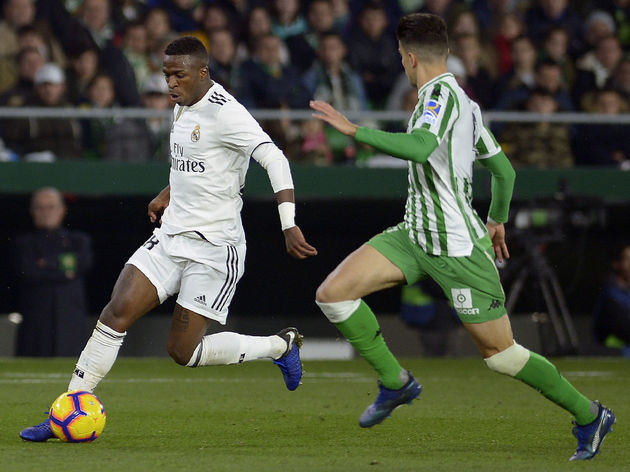 ​Real Madrid have been out of sorts and struggling for consistency all season, so Santiago Solari decided to switch things up by fielding a three at the back formation, which lends itself to more solidity in defence. Whilst, for the most part, they did look much more solid in defence, the formation led to a number of other sacrifices across the pitch. They saw very little of the ball, lacked any sort of width and were restricted to infrequent counter-attacks.

Given Madrid’s current situation, experimentation in the league should be welcomed. They were very fortunate to come away with a victory, but it does lift them back into the top four ahead of Alaves. Winning La Liga is beyond them, but securing a Champions League place should still be achievable – as long as they continue to develop and adapt.

Vinicius is clearly growing in confidence as the season goes on and he is more than warranting his place in the starting XI for Madrid.

He was their standout performer and lead the line admirably – especially in the second half when the experienced ​Karim Benzema was forced off through injury. He demonstrated impressive energy and drive, combining excellent forward play with determined pressing.

What stood out in particular was his decision making. Very rarely did he misplace a pass or hold on to the ball for too long, which indicates he is more than ready to maintain his place going forward.

Vinicius Jr. What a player. Seriously.

He’s been a massive counterattacking threat as well.
Excellent showing ✨

Valverde’s age and lack of experience needs to be take into consideration, but he was undeniably poor on the night.

He tended to drift in and out of the game and he spurned two golden opportunities in the first half which would have put his side two goals to the good and out of sight.

Real Madrid are back in action on Wednesday when they play out the second leg of their Copa del Rey fixture against Leganes. Following on from that, they host Sevilla in La Liga on Saturday.