Sergio Ramos has admitted he will have to switch up his penalty style to maintain his excellent run of scoring from the spot, having converted his fourth Panenka of the season in Thursday’s 4-2

The defender scored twice as Real Madrid survived an early scare in their Copa del Rey quarter final first leg to take a two goal advantage into the return fixture on 31st January. 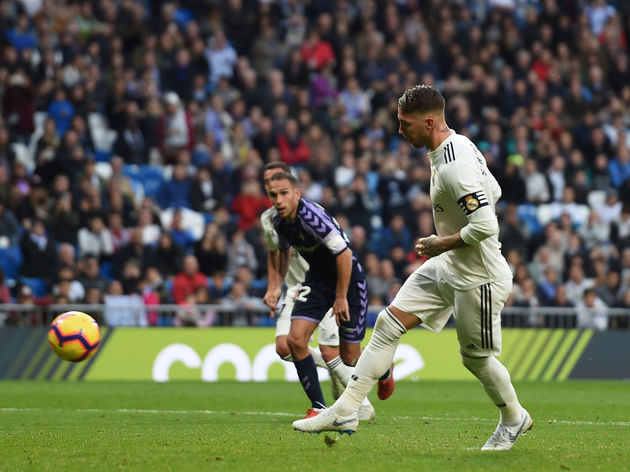 After the game, the Madrid captain admitted that he can’t make a habit out of chipping the keeper from 12 yards out (via ​Marca), saying: “Keepers are staying on their feet for longer so maybe I’ll have to put it to the side next time…you do not have to get used to it.”

Ramos is no stranger to providing a threat in front of goal and has made a habit of getting into the opposition’s box throughout his career, reaching the 100 goal mark earlier on this season.

He was also quick to heap praise on striker Karim Benzema after the game, adding: “He is very important to [Real Madrid] whether he’s scoring or not, he’s a key player in the way he presses and his defensive work. “He’s less showy than other forwards, but is equally as important to us winning matches, when we need Benzema the most, we all know he’ll be there. He’s a great player.”

The Spaniard, 32, isn’t taking Real’s aggregate advantage for granted, saying: “It’s more than open, although we would have liked to keep a clean sheet, it’s a good result, there’s nothing easy, Girona eliminated Atlético, put three in. We took an important step, but we have to finish it there.”