Roll back the clocks less than two years, and Isco was an integral part of Zinedine Zidane’s sleek, Europe-conquering midfield.

When he wasn’t picking out the top corner with his magical wand of a right boot, Isco was assisting his Madrid teammates to do just that.

That contract is said to include a €700m release clause, a price which, despite his substantial footballing talents, is unlikely to be met by potential suitors. With Cristiano Ronaldo’s summer departure, it seemed like Isco was ready to step up, help fill the void and become the main man at the Bernanbeu, as he had been at Malaga five years before.

However, instead the attacking midfielder has massively fallen out of favour under new boss Satiago Solari and ​daily reports link him with the Bernabeu salida.

Though he has appeared in 14 La Liga games for the Spanish giants this term, Isco has started just five of those. He has notched four goals in all competitions this year, two of which came against La Liga 2 opposition UD Melilla and his numbers suggest he is suddenly a pale imitation of the player from seasons gone by.

When we compare this year’s stats to his previous seasons with Los Blancos, the differences are stark at best. Isco joined the club before the 2013/14 season and notched eight goals and seven assists in his first 23 ​La Liga starts for Real. Every season since, he has contributed to at least ten goals in the top tier of Spanish football. 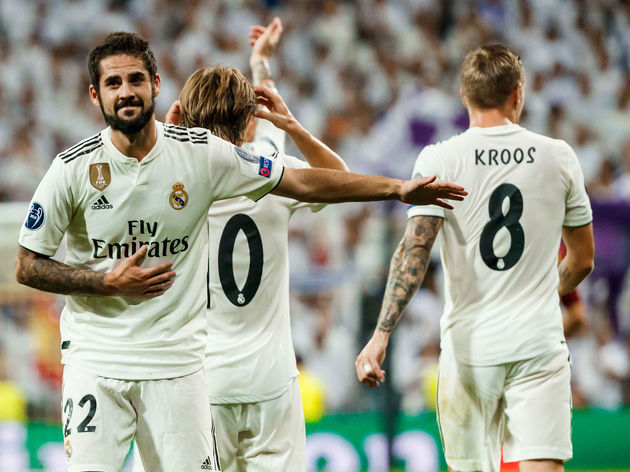 His most successful year in terms of goal contributions came in the 2016/17 season, where he scored ten goals and recorded eight assists in 30 La Liga appearances under the tutelage of former manager Zidane.

But where does the Spaniard stand on his current situation at the club? If recent reports are to be believed, Isco is determined to stay in Madrid, but only if current manager Santiago Solari leaves at the end of the season, as many think he will. Since Solari took control at the Bernabeu in November, Isco has not started a single La Liga game and it is clear that the 26-year-old is expendable to Solari’s plans.

We have seen a similar ‘you go, or I go’ situation at ​Manchester United earlier this season with Jose Mourinho and Paul Pogba, on which occasion the manager was the one to go. The football romantics would insist that no player is bigger than the club, but from a Real Madrid perspective, perhaps they should consider holding on to one of their prized assets in Isco instead of persisting with Solari who has struggled in his first few months at the helm.

On the flip side, the club are set to undergo a summer overhaul this year as they look to reaffirm themselves as title contenders, and Isco could be a key part of their transfer dealings. According to Marca, Madrid will not consider bids for the midfielder below the sum of €100m, which, should a club meet this offer, could fund the Los Blancos’ summer makeover.

If the club decide to persist with their inexperienced manager and Isco follows through on his promise to leave, then where could he end up? As they often are with the world’s hottest talents, Manchester City and PSG have staked their claims to acquire his signature with Pep Guardiola reportedly a huge fan of the young technician.

If ​City do decide to pursue the 26-year-old’s signature, it will not be the club’s first attempt to sign the midfielder. Six years ago, former City manager Manuel Pellegrini reportedly attempted to hijack Madrid’s move for Isco ,with the Italian manager keen on a reunion with his former player. However, the former Malaga midfielder favoured a move to Madrid over Manchester and signed for the club for just £23m.

The question remains, has Isco achieved all he can with the Spanish giants, who have unquestionably taken a huge step backwards this term following the sale of ​Cristiano Ronaldo last summer. Only Isco’s Real Madrid teammates have won as many Champions League titles since 2014 as the Spaniard, who has won the esteemed competition in all but one of the seasons of his Madrid tenure. However, i