Real Madrid will take an aggregate advantage back to the Santiago Bernabeu, after downing Ajax 2-1 in a match where they struggled for large parts and were thankful a controversial intervention from VAR.

​It was the home side who made the brighter start, pressing Madrid into regular mistakes at the back with an extremely effective high press.

They were comfortable on the ball too, and had a great a chance to open the scoring after 25 minutes, when Dusan Tadic was played through on goal, and did well to hold off Sergio Ramos, only to rattle the crossbar with his shot. 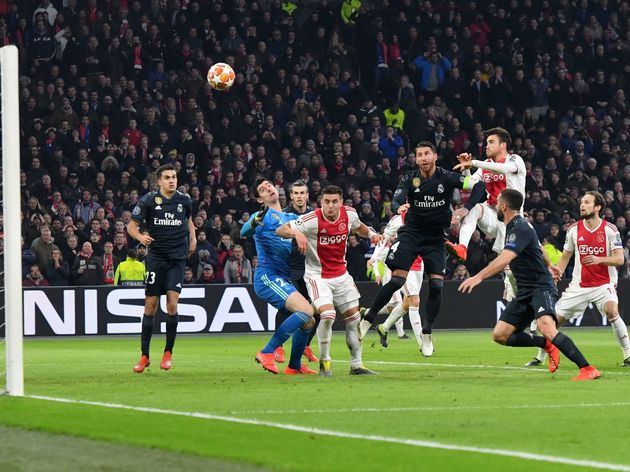 And they thought they’d earned their just rewards with an opening score in the 39th minute, when Nicolas Tagliafo headed the ball in after a Thibaut Courtois flapsterclass.

However, controversially, VAR came to Courtois and co.’s aid, ruling out the goal on grounds of obstruction from Tadic and/or a highly marginal offside – both were a stretch at best and neither were “clear and obvious” as the mantra dictates.

Inevitably, this came back to bite the Dutch in the second half, when Vinicius Jr. produced some scintillating play down the wing, controlling the ball with aplomb at full tilt before cutting in and teeing up Karim Benzema, who smashed it into the net to steal a crucial away goal.

If that’s interference, maybe. If that’s been ruled out for offside: an example of the mission creep that’ll make VAR a nonsense, and further evidence that the offside rule as it is currently employed is insane.

Hakim Ziyech looked to have earned the Amsterdam-based team a deserved draw in the 75th minute after a squared ball from David Neres, but substitute Marcos Asensio broke hearts in the Johan Cruyff Arena with a tap-in at 87 minutes to sneak an unlikely victory.

What else is there to talk about except the VARse. Erik ten Hag’s side had been spectacular in that first half, and deserved to open the scoring. But they were denied with a piece of history – the first ever time VAR had disallowed/overturned a goal in the Champions League – and it was dubious to say the least.

Oh and, just to rub salt in the wounds, it took absolutely ages. Years in fact. It’s now 2082, and yes, the Rolling Stones are still touring. Thankfully, they didn’t let it get the better of them and rallied themselves after the visitors scored the de facto opener to earn what would’ve been a more than worthy stalemate. Less gratifyingly, it was in vain, as Asensio snuck in right at the death.

STAR MAN – Ziyech took his goal with suitable composure, and Neres was a threat down Dani Carvajal’s flank all night, but it has to be Dusan Tadic.

Hakim Ziyech and Dusan Tadic completed four take-ons each in the first half against Real Madrid, one more than the entire Real side combined (3).

The former Southampton playmaker was instrumental to his side, on and off the ball, especially in the first half. Makes you wonder why the Saints sold him in the first place – they could certainly use him right now.

WORST PLAYER – It would be a harsh label to hand any Ajax player on that pitch, but it goes to substitute Kasper Dolberg, for scuffing a big chance in the 92nd minute right into the arms of the struggling keeper.

All the talk pre-game was of a Real resurgence, and the possibility of them recording an unprecedented fourth consecutive triumph in this tournament, against all the odds of their horrendous start to the season.

And all that talk looked outrageous in a first half where they were pretty much dominated. But, seeing as it was the ​Champions League and all, and seeing as they’ve owned this competition for four of the last five years, they weren’t going to let that faze them, were they?

As it so often is, it wasn’t particularly pretty, nor that warranted, but Real will go back to the Bernabeu with a healthy advantage and a glint in their eye. STAR MAN – The last few weeks have been all about two men – Vinicius Jr. and Karim Benzema. The Frenchman has been in electric goalscoring form, and showed that once again tonight, but it was the Brazilian who shone the brightest.

The deft, deft control he displayed to bring down Sergio Reguilon’s probing ball for the 31-year-old’s opener was the skill of this round so far, and his poise afterwards wasn’t too bad either.

WORST PLAYER – Who else but the flapping former Chelsea man. Sure, it didn’t cost his side in the end, but if Vinicius deployed the skill of the round, then the Belgian dropped the biggest clanger.

I’m still not quite sure how he managed it, either. An embarrassing one, but luckily for him it was just his ego that was affected, not the scoreline.

​Real Madrid will face Girona and Levante in La Liga before preparing themselves for two El Clasicos against Barcelona – the second leg of their Copa del Rey semi final and a potentially title-deciding league clash – all before they meet Ajax once more in the capital for this second leg.

Ajax, meanwhile, have three fairly negotiable Eredivisie ties to play, though are in a similar boat cup-wise, with a semi final of their own against Feyenoord.