A clinical display earned Barcelona a spot in the Copa del Rey final as the La Liga champions swept aside Real Madrid, with Luis Suarez scoring twice on Wednesday night at the Bernabeu.

The hosts did plenty of the heavy lifting in the first half, with Vinicius Junior taking five shots himself, but they fell behind in the tie when Ousmane Dembele ​teed up Suarez, who dropped a shoulder before striking low at the near post. An instinctive Marc Andre ter Stegen save from

With Los Blancos unlikely to make up the gap between themselves and Barca in the La Liga title race, the Copa del Rey had been viewed as a realistic piece of silverware this season.

But it wasn’t to be for Real, who huffed and puffed going forward but failed to create anything good enough to beat Ter Stegen. 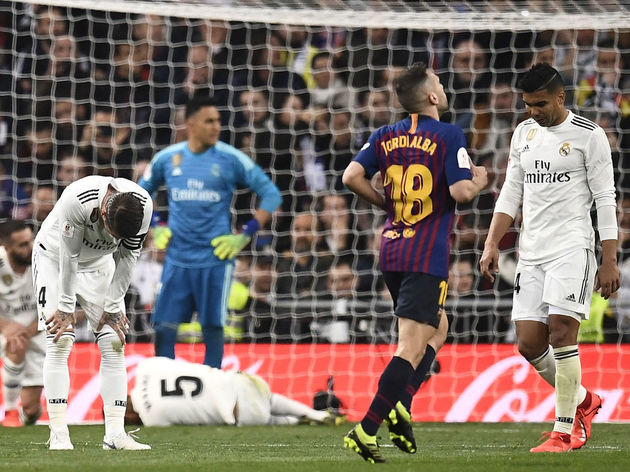 Their remaining efforts must now go into winning the Champions League again, but it remains to seen whether they have the stomach for that, especially after such a tepid display on Wednesday.

STAR MAN – While Real’s attacking trio failed to conjure up anything particularly magical, Vinicius’ pace startled Barca’s back four frequently and the Brazilian looked the hosts’ most dangerous outlet throughout the 90 minutes.

The 18-year-old lacked the finishing touch that ​Real looked to him to provide, with Karim Benzema and Lucas Vasquez both ineffective, but he’ll certainly have better days at the Bernabeu.

Vinicius is absolutely ridiculous. He’s dicing up any and everybody that comes near him.

If ever a single play encapsulated where a player is in his career it’s Vinicius dribbling through the whole Barca defense, but failing to score. The degree to which he figures out this finishing thing will determine whether he’s a superstar or just a good to very good player.

A La Liga, Copa del Rey and Champions League triple remains on for ​Barcelona, who were deadly on the break on Wednesday.

Barca had more than their fair share of possession but often looked to attack when in transition, with Dembele and Suarez both menacing on the counter in particular. Ernesto Valverde’s side will be favourites in the final against either Real Betis or Valencia, and there should be plenty of silverware in their cabinet come the end of the season.

STAR MAN – Suarez netted twice and would have grabbed a hat trick had Varane not decided to score an own goal himself.

He hasn’t been in great form in recent weeks but any suggestions that he’s no longer the player he was once were put to bed on Wednesday with a typically tenacious and clinical display.

Luis Suarez has scored 10 goals in 13 games against Real Madrid in all competitions, more than any other player since his debut for Barcelona in 2014/15. pic.twitter.com/iLBhVSTwL9

The two sides meet again for another Clasico on Saturday, this time in the league when Real will look to cut the gap between themselves and Barca to six points.

Barcelona face Rayo Vallecano the week after in La Liga, while Real Madrid will hope to reach the quarter finals of the Champions League in the second of their last 16 clash with Ajax on Tuesday.