​Real Madrid bounced back from their embarrassing Champions League exit with a comprehensive 4-1 win over Real Valladolid on Sunday evening.

The action was relentless right from the off and Real narrowly avoided going behind three times in quick succession. Ruben Alcaraz ballooned a penalty over the bar for Valladolid, before Sergi Guardiola had two goals ruled out for offside. Valladolid weren’t to be denied a fourth time and finally broke the deadlock just before the half hour mark through Anuar – only to be pegged back ten minutes later as Real equalised through Raphael Varane. 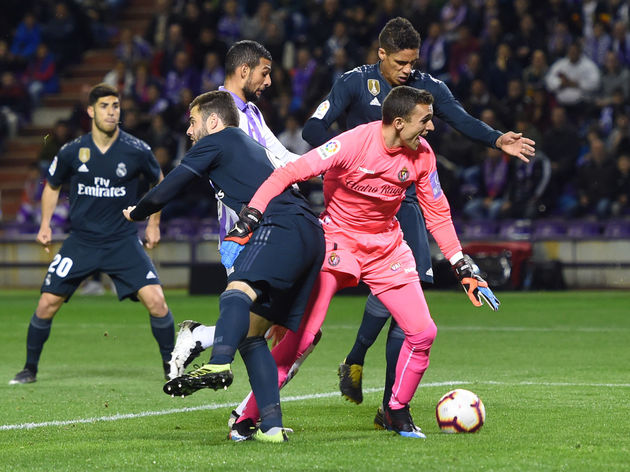 Karim Benzema then scored a brace within the first 15 minutes of the second half to put Real into a comfortable lead. The win was put into some doubt when Casemiro was sent off with ten minutes left on the clock, but Luka Modric sealed the win in the closing stages with a tidy close range finish.

Check out our report of the clash below.

It is no exaggeration to say that the past week has been utterly catastrophic for ​Real Madrid. Whilst everything is said to be crumbling behind the scenes, very little is going right on the pitch either – exemplified by their embarrassing Champions League exit at the hands of Ajax. The first half was far from convincing as they were guilty of lacking intensity and direction in the final third, as well as appearing to be all over the place at the back – not too dissimilar from their performance against Ajax. However, they were able to turn things around after the interval and their performance was much improved in all areas of the pitch.

They were somewhat fortunate not to be further behind in the first-half, but they rode their luck and were deserved winners by the final whistle. Given how disastrous a week it’s been for Santiago Solari’s side, getting the win was absolutely crucial.

STAR MAN – There is no denying the fact that he cuts a divisive figure, but ​Benzema’s contribution to Real Madrid should not be underestimated. He was there when his side needed him most in the second half, netting an impressive brace to secure the victory.

He’s never been a prolific striker, but his record is nothing to be sniffed at. This season has been no different and he’s now on 22 goals in all competitions.

I’m happy for Benzema, one of the few players who actually tried to do something this season

Karim Benzema has now scored 22 goals for Real Madrid this season – 9 more than any other player. #HalaMadrid

Valladolid are back in La Liga action against Eibar next Sunday, whilst Real Madrid welcome Celta Vigo to the Bernabeu on Saturday afternoon.