Cristiano Ronaldo did it yet again in the Champions League this week, with the Juventus superstar further cementing his place as arguably the greatest player of all time. As hard as it may be to believe now, it wasn’t actually until his fourth season at Manchester United that Ronaldo scored his first Champions League goal (excluding qualifiers).

But it was a spectacular Old Trafford night when it eventually did come in April 2007, with Ronaldo scoring twice as United hammered Roma 7-1 in the quarter final second leg.

This was Ronaldo’s breakout season with United – the first of his career that yielded more than 20 goals – and the offered the first true signs of the level he would go on to reach. 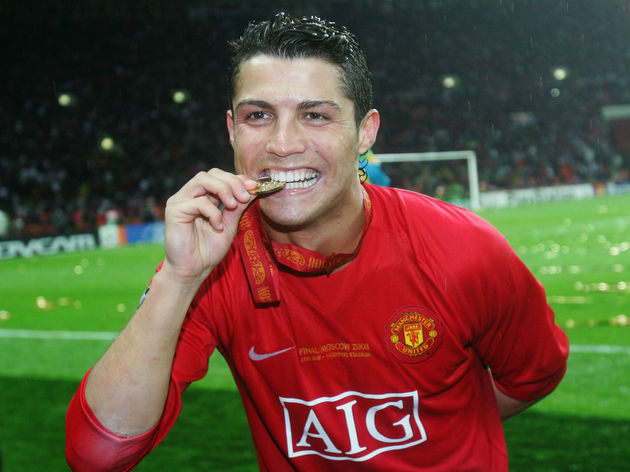 Ronaldo scored eight Champions League goals during the 2007/08 campaign as United lifted the trophy, including a masterful free-kick against former club Sporting CP in the group stage and a bullet header against Roma in the quarter finals.

He scored his 42nd and final goal of the season in the final against Chelsea, rising highest in the Moscow penalty area to head in. He later missed his kick in the penalty shootout, but United prevailed in the end and Ronaldo was a European champion for the first time. A Ronaldo brace against Arsenal at the Emirates Stadium in the semi final second leg in 2009 sealed United’s place in a second successive Champions League final. Both goals were very different, but each was still uniquely ‘Ronaldo’ in their own way.

The first was an audacious free-kick that he had no right to score from. The second was a breakaway, a move which he started and then sprinted most of the length of the field to finish. The 2014 Champions League final was special for many reasons. Real Madrid beat city rivals Atletico to seal the elusive Decima – their 10th European title, while Ronaldo’s 120th minute penalty was his 17th goal of the competition that season, an incredible tally that is still a Champions League record.

Additionally, it was Ronaldo’s second Champions League title after his earlier success with United, further feeding his unquenchable desire for glory and adulation. Ronaldo endured a tough few months during the 2015/16 season. He appeared to criticise his Real teammates after a derby loss to Atletico in February and was booed by his own fans a month later. He also drew blanks in the Champions League semi final and final.

Ronaldo had actually scored 16 goals in the competition that season – close to matching his own record. But, unable to score in the final against Atletico, he was still able to claim the glory when he converted Real’s fifth and final penalty in the shootout. Title number three. 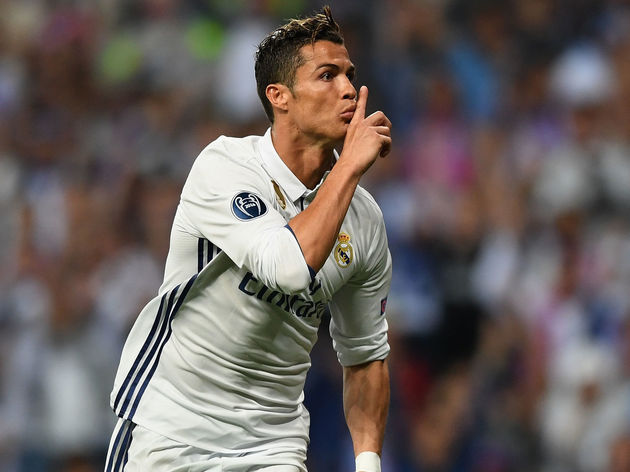 En-route to winning the Champions League again in 2016/17, Ronaldo put Bayern Munich to the sword in lethal fashion in that season’s quarter finals, responsible for as many five of the goals Real scored against the Germans in the 6-3 aggregate win himself.

As if that wasn’t enough, the first leg against Bayern also yielded his 100th goal in European club competition, the first player in history to reach a century. He achieved the milestone in 143 appearances, scoring the second 50 goals in only 47 games. After killing off Bayern in the 2016/17 quarter finals, Ronaldo then scored a hat-trick against perennial foes Atletico in the first leg of Real’s semi final that season, a result which virtually put the tie to bed after only one game.

Ronaldo then scored twice more in the final against Juventus as Real cruised to a 4-1 victory and became the first club to successfully retain the Champions League in the post-1992 era. They were also Ronaldo’s first two open play goals in a Champions League final since 2008. After reaching 100 Champions League goals in April 2017, Ronaldo reached the century mark for a single club the following year when he scored his 100th goal in the competition for Real in the 2017/18 last 16 against Paris Saint-Germain.

Ronaldo scored three times over the course of the two-legged tie. His goals saw Real win 5-2 on aggregate against a potentially dangerous opponent, en-route to an unprecedented third straight Champions League title, and the player’s fifth overall. Prior to lifting trophy number five in 2017/18, Ronaldo scored one of the best goals the Champions League has ever seen when he pulled off an unbelievable bicycle kick against future club Juventus in the first leg of their quarter final meeting.

Real won 3-0 on the night – Ronaldo scored twice – with that cushion enough to keep Juve suitably at bay for Los Blancos to reach a fourth final in five years. Two mistakes from Loris Karius and a Gareth Bale stunner then gave Real a famous victory over Liverpool in Kyiv. Ronaldo accepted the offer to leave Real in the summer of 2018, completing a €100m move to Juventus, a transfer believed to be engineered by the Italian club to help them finally claim a first Champions League title since 1996.

Aged 34, Ronaldo showed his worth in the last 16 as he struck a hat-trick against old rivals Atletico to overturn a 2-0 aggregate deficit and progress against the odds. “This was why Juventus brought me here,” he remarked after the final whistle, and it’s true.