Real Madrid secured a momentous victory on Saturday with a 2-0 win at home to Celta Vigo in La Liga, in Zinedine Zidane’s first game back at the helm of Los Blancos.

After a tight first half ended goalless, the home side looked to have finally broken the deadlock ten minutes into the second half when Luka Modric produced an ambitious volley from outside the box which bounced past the helpless Ruben Blanco.

However, the goal was chalked off as Madrid players were in an offside position were judged to have influenced play.

Los Blancos did not have to wait long before they were finally able to take the lead. Marco Asensio pulled the strings, sliding the ball through to Karim Benzema in a dangerous position, and the Frenchman squared the ball for Isco to fire home from close range.

​Madrid looked comfortable after taking the lead, and Gareth Bale marked his return to the starting XI with a goal which is likely to reinstate him as a chief figure in Zidane’s plans. Marcelo slipped the Welshman through on goal and Bale slipped the ball comfortably past Blanco to add gloss to Madrid’s victory in Zidane’s homecoming.

Zinedine Zidane made a bold team selection as he returned to the home dugout at the Bernabeu, but the team’s performance indicated that the Frenchman has some thick cobwebs to blow away before getting his side back on track.

The likes of ​Gareth Bale, ​Isco and ​Marco Asensio were all drafted into an attacking setup which was seemingly designed to implement greater purpose and quality in the team, but Los Blancos’ recent struggles and inconsistencies have left much work to be done.

The home side struggled to find fluidity and authority in their game on Saturday, despite the injection of pace and power in attack through the changes in personnel. Madrid appeared stronger on paper than they have for much of the season, but Zidane will need to infuse his side with renewed confidence and belief in order to get the best out of his charges once more.

Beautiful football by Real Madrid! Asensio with a SUPERB run and through ball to Benzema. The Frenchman assists Isco for the goal!

Isco has scored the first goal of Zinedine Zidane’s second spell in charge of Real Madrid.

It’s his first start in LaLiga since October 2018.  pic.twitter.com/gBI1ajLAoR

The link-up play between Asensio, Benzema and Isco for Los Blancos’ opener suggested that Zidane may have found a successful formula, but one which needs fine-tuning on the training ground to lead Madrid forward with consistency. 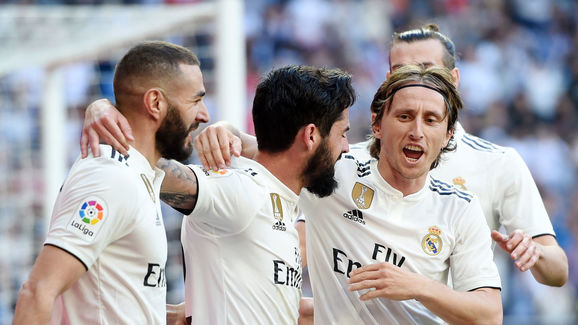 Madrid were armed with greater creativity and guile in central areas as Zidane restored Isco and Asensio to the starting XI, but it was ​Luka Modric who continued to make his side tick as usual from a deep-lying midfield base.

The Croatian was unlucky to see a goal chalked off for offside after he had appeared to give his side the lead, but the midfielder’s role in Madrid’s opener was of great importance in itself, as Modric won the ball back in the middle of the park before moving it forward.

Modric remains the heartbeat of his side and his steady influence will be key to Zidane’s hopes of leading Madrid forward once more. Real Madrid host Huesca next time out in a second consecutive home game in La Liga after the international break.