It’s pretty rare that world class footballing ability is passed down a generation. There have been countless stories of professionals having a stab at following in their parent’s footsteps, but never really materialising as a top-level talent.

Rarer still, though not unheard of, are the cases where young players go on to match, and then surpass, the gauntlet laid down to them by their family name.

With Ryan Giggs ​confirming on Monday that his 12-year-old son is in the embryonic stages of an attempt at just that, however, we’ve thrown together a list of seven famous players whose legacies could soon find themselves under threat by the emergence of their offspring. 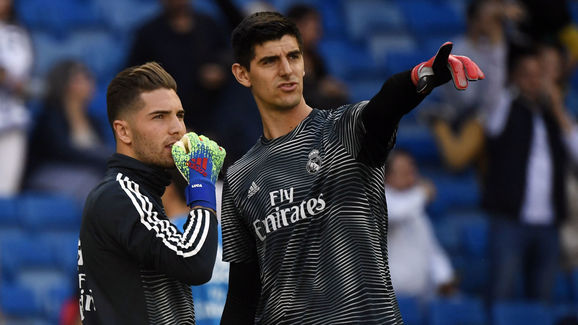 ​By sheer balance of probability, it’s current Real Madrid manager Zinedine Zidane who is most at risk of being upstaged by one of his kid’s – simply because there are four of them on the scene.

As the legendary Frenchman takes over ​Real for the second time, Luca, the most established of the Zidane fraternity, will serve as his third-choice goalkeeper, behind Thibaut Courtois and Keylor Navas.

23-year-old Enzo, meanwhile, plays for La Liga 2 side Raya Majadahonda on loan from Swiss side Lausanne-Sport having come through the Real academy. Theo and Elyaz – 16 and 13 respectively – currently play for the Galacticos youth sides. There are high hopes for Weah – son of PSG and AC Milan legend George – as he progresses towards a first team role with the former, and at 19, he’s currently making a name for himself on loan at Celtic.

He has quite a bit to live up to, mind you. While his dad’s spell in the Premier League with Chelsea and later Manchester City were short-lived and underwhelming, he scored 194 goals in 413 games over a career largely spent at the highest level throughout the late 80s and 90s.

And he went on to become the president of Liberia. Your move, Timo. Lilian Thuram, 47, is the most capped player in the history of the France national team and counts two Serie A titles, a World Cup and a European Championship among an extensive list of honours. Marcus Thuram, 21, is a striker for Guingamp, and hasn’t yet won anything at senior level.

Still, he’s showing a lot of promise. He’s become a first team regular for the Ligue 1 side this season, scoring eight goals in 24 league appearances, and has incidentally already surpassed his dad’s career total of ten goals.

And then there’s 17-year-old midfielder Khéphren, who is developing impressively in Monaco’s renowned youth academy. It seems the Thuram name will live on. ​Also plying his trade at Guingamp, Didier Drogba’s son Isaac made headlines when he moved from his dad’s old stomping ground in the summer, and is yet to graduate into the first team – but is widely expected to impress when he does.

And if he proves to be even half the player his old man was, then they have a find on their hands. Ivorian Didier is thought of as one of the best strikers in Premier League history, scoring 164 goals in 381 games for the Blues. ​At just 19, Justin Kluivert is already a pretty established player in his own right. The winger has already cut his teeth at Ajax and earned himself a high-profile move to Roma, where things have stalled somewhat due to their indifferent domestic form.

If he continues to develop, he has a decent chance of escaping his father’s shadow, although that won’t be an easy task. Patrick Kluivert is one of European football’s best-known names, having scored incredible amounts of goals with both Ajax and Barcelona, lifting a Champions League and two Eredivisie titles with the former. ​Diego Simeone is best known as the hugely successful manager of Atletico Madrid, but his playing career was nothing to scoff at either. Playing in midfield, he achieved a good deal of domestic success with both Atletico and Lazio, and lifted a UEFA Cup in a brief spell with Inter.

In many ways, 23-year-old Giovanni’s career has paralleled that somewhat in its early stages, as he left Argentina to join a major European side in Fiorentina at a young age. He’s yet to lift any silverware, but that will likely come for the striker in a career showing some serious promise. There were no pictures of Edwin van der Sar’s son Joe available, so here’s a snap of his dad looking rather suave against the majestic backdrop of Johan Cruyff ArenA.

Currently the CEO of Ajax, Edwin’s career speaks for itself. He won virtually everything with Manchester United, and was still at the club when his son Joe joined the youth ranks at Old Trafford.

The 21-year-old has since gone on to link up with his old man at Ajax, before joining Den Haag then RKC Waalwijk, where he currently plies his trade in the KNVB reserve league.