​Malta host Spain at the Ta’ Qali National Stadium on Tuesday as both sides look to continue their strong starts in Group F of the Euro 2020 qualifiers.

Ray Farrugia’s Malta side earned a 2-1 victory over Faroe Islands last time out, whilst Spain claimed victory by the same scoreline over Norway, giving Luis Enrique’s side the perfect start to their qualifying campaign.

With both sides set to play their final game of the current international break, each will be keen to conclude the period on a high and strengthen their positions in Group F after both enjoyed positive opening games.

Malta will be without Andre Agius due to suspension after the defender was sent off during the 2-1 win over Faroe Islands on Saturday.

Spain have no fresh injury concerns following their 2-1 victory over Norway on Saturday, though ​Atletico Madrid midfielder Saul Niguez was called up by Luis Enrique to replace Fabian Ruiz ahead of the opening clash, with the ​Napoli star suffering from illness.

Enrique made a number of bold selections ahead of the latest round of international fixtures, with star names such as Koke, Thiago and Isco among those left out of the squad altogether.

The two sides have met seven ​times previously and, unsurprisingly, Spain have won on every occasion.

The last encounter between the two came in February 1997, when Spain won 4-0 and goals from Pep Guardiola, Pizzi and an Alfonzo brace secured a comfortable victory for La Roja. September 1963 saw the first meeting between the two nations in the Mediterranean Games. Spain beat Malta emphatically on that occasion, as a Ramon Moreno Grosso hat-trick inspired an 8-0 win for the Spaniards.

Malta have responded well to a crushing 5-0 defeat to Kosovo in the Nations League in November, as Ray Farrugia’s side earned a 1-1 draw against Faroe Islands in their last outing in the competition, before claiming a 2-1 victory when the sides met again on Saturday.

Meanwhile, Spain have also had to bounce back from a disappointing defeat in the final game of their Nations League campaign in November, when they were beaten 2-1 by World Cup finalists Croatia.

Spain also suffered defeat to England in the Nations League, but have since responded with a 1-0 victory over Bosnia and Herzegovina​ in November and a 2-1 success over Norway on Saturday in Enrique’s side’s first outing of 2019 to open their Euro 2020 qualifying campaign.

Here is a look at how each team has fared in their last five matches:
​

Spain may not be at their free-flowing best under Luis Enrique quite yet, having required a penalty from ​Sergio Ramos to see them over the line with victory against Norway last time out, but La Roja are still a side bursting with quality all over the pitch.

The likes of Inigo Martinez, Dani Ceballos and Marco Asensio have added a freshness to the side alongside more seasoned campaigners such as Ramos and Sergio Busquets, and Enriques’ side appears both flexible and well-balanced. 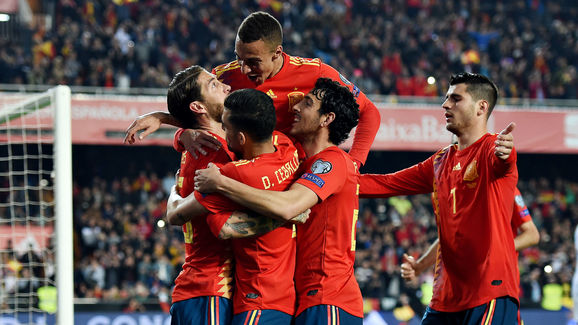 Emphatic dominance may no longer be the way of their game as was the case during the previous golden era, star-studded with Xavi, Iniesta and co, ​but Spain have found a revised means of winning with efficiency under Enrique and they should have too much quality for Malta.