​Real Madrid fell to their ninth La Liga defeat of the season as they were beaten by Valencia to fall five points behind arch-rivals Atletico in Zinedine Zidane’s first defeat since his Bernabeu comeback.

Los Blancos controlled the game early on, but it was the hosts who took the lead in the 35th minute when Goncalo Guedes beat Keylor Navas at his near post with a smart finish to send the Mestalla into raptures.

Valencia kept the pressure on before half time, but failed to convert good chances, with Geoffrey Kondogbia and Rodrigo both firing over.

After resting a number of players in the narrow win over bottom of the league Huesca on Sunday, Zidane played close to a full strength side in this encounter, with Gareth Bale being dropped to the bench.

The 13 time European champions reportedly set for a squad overhaul in the summer, these last few games of Madrid’s difficult season are a good opportunity for Zidane to see which of his current crop are worthy of a place in his squad next season.

The first half performance in particular would suggest that investment in the side can’t come soon enough. While they controlled most of the ball, they failed to create a meaningful chance, and Los Blancos simply couldn’t handle Valencia’s high intensity pressing.

Valencia are still playing for a top four finish, in a Europa League quarter-final and have the Copa del Rey final to look forward to, while Madrid look like they just want their miserable campaign to end, with midfielders Toni Kroos and Ballon d’Or holder Luka Modric looking severely off the pace. 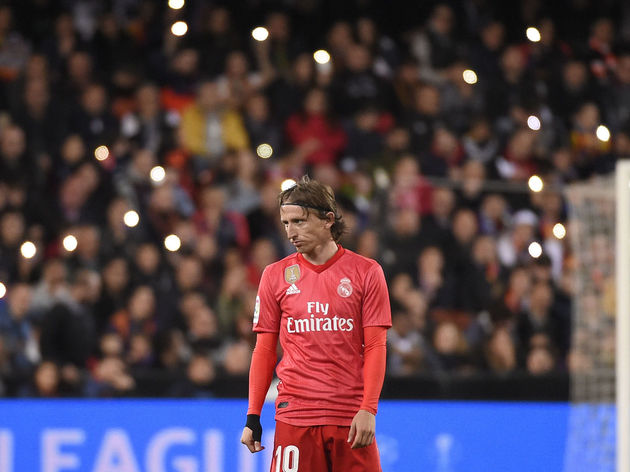 With the second half being just as toothless as the first, with the exception of Benzema’s goal right at the end, Zidane has a big job on his hands to motivate his players for the final eight games of the season

Whereas his teammates may have appeared uninterested at times, the Spanish right back looked as though he had a point to prove, and always willing to help out the attack while trying his best to stay disciplined in defence. The 23-year-old has struggled since his £27m move from Real Sociedad last summer, making 13 league appearances for the club, but Zidane will surely be impressed by the work rate and effort Spaniard displayed in this match.

Valencia were determined to catch Los Blancos out on the counter, but

Real Madrid will look to keep tabs with Atletico when they host mid-table Eibar on Saturday, before a trip to Leganes nine days later.

Unlike Los Blancos, Valencia still have a realistic chance of winning silverware this season, as their Europa League first leg clash with Villarreal next Thursday will be sandwiched in between La Liga matches against Rayo Vallecano and Levante.