​Real Madrid scouts were in attendance at the Estadio Da Luz on Thursday night to watch Luka Jovic in action as Eintracht Frankfurt took on Benfica in the Europa League.

The Serbian striker has emerged as one of the most highly-coveted forwards in Europe this season, having scored 17 goals in 26 Bundesliga appearances and eight in 11 Europa League outings, including one in the 4-2 defeat to Benfica in midweek.

Jovic’s Frankfurt side may have been on the losing end of that game, but the 21-year-old’s fine goalscoring form continued. According to ​Marca, ​Real Madrid are among the clubs interested in a move for the Serbian and sent scouts to watch their man in action on Thursday.

The presence of Madrid officials at the Europa League clash seems to indicate a concrete interest on their part in moving for Jovic, though it is suggested that they will face competition from La Liga rivals ​Barcelona and ​Atletico Madrid in any move to sign the Bundesliga star.

Scouts of the three Spanish sides were apparently in attendance at the Estadio Da Luz, though Atletico may have been keeping an even closer eye on Benfica star Ruben Dias on the night.

Any potential sale of Jovic is complicated by the fact that Frankfurt would owe 20 per cent of any fee they receive for the striker to Benfica. The striker is currently on loan at the Bundesliga side from the Lisbon-based outfit, but is set to complete a permanent switch to Germany.

However, with scouts from ​Manchester City, ​Manchester United and ​Bayern Munich also said to have been watching with interest on Thursday night, Jovic is likely to complete a swift move away from Frankfurt in the summer. 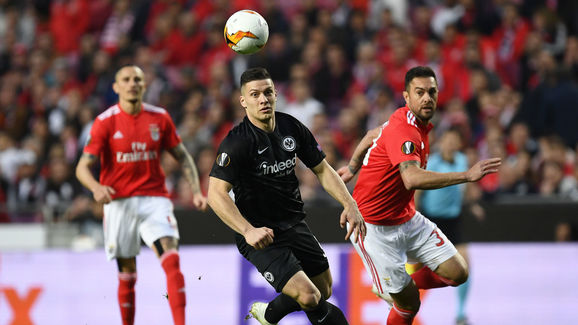