We’re at the semi final stage of the Champions League, and neither Zinedine Zidane or Cristiano Ronaldo are anywhere to be seen. Come again?

It does really feel like the start of something new, as Real Madrid’s vice grip on the trophy comes to its merciful end. Gone, perhaps, are the days of the same rotation of four or five teams making the semi-finals, year after year after year.

Since few of the tournament’s favourites have any hope of lifting the trophy, then, we thought we’d at least give them something to fight for. Who has been the most disappointing in the Champions League this season?

And then Ronaldo showed up in the second leg and sent them home in time for dinner.

By no means a disastrous campaign, but the submissive manner in which they crashed out after an exciting start means they edge into the periphery of this list. In truth, however, we expected a little more from the side who won the Bundesliga before Christmas, but now sit in second place. ​It looked as if Spurs had drawn a very difficult tie at first, but they made such short work of the esteemed Germans over two legs that they may as well have been playing Huddersfield.

A 3-0 win at Wembley in the first leg preceded a 1-0 victory courtesy of a Harry Kane strike at Westfalenstadion, and now they look to have chucked the Bundesliga, it looks set to be a disappointing season all round for Lucien Favre’s men. Well, sort of. 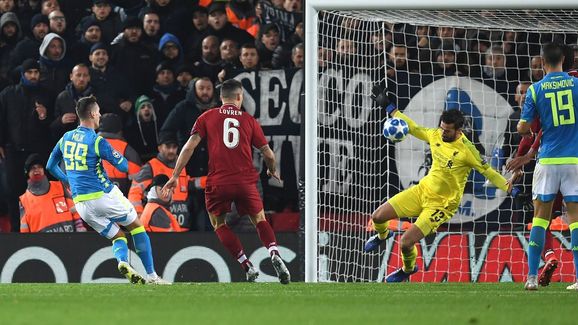 Few expected Napoli to go the distance in the Champions League this season, especially after landing in the group of death with Liverpool and Paris Saint-German, but given how impressive they’ve been domestically under Carlo Ancelotti, you can’t help but be slightly underwhelmed by their showing.

Many will point to their narrow defeat at Anfield – which in itself wasn’t a horrific result considering Liverpool’s home form of late – as the reason behind their demise, but all in, they only managed to win two of their six matches (one of which at home to Red Star Belgrade) and bowed out in third place.

Yes, Arkadiusz Milik could have sent them through at the death against the Reds, but he was bested by the human door that is Alisson Becker, and he didn’t. What’s more, they look in perilous danger of meeting a similar fate against Arsenal in the Europa League quarter-finals on Thursday. It’s worth noting that ​Bayern, by all means, actually had a pretty good Champions League campaign before coming up against Liverpool in the round of 16. They went undefeated in the group stage, and after a 0-0 draw at Anfield came amid the beginning of their domestic revival,  the suggestion was that there could be life in the old dog(s) yet.

It wasn’t to be, however. Coming up against their old foe in Jurgen Klopp and his formidable Liverpool side, they fell some way short in Bavaria, losing 3-1, and it became abundantly clear that some regeneration is needed if they are to return to European glory.

To that end, they’ve already started. Benjamin Pavard and Lucas Hernandez have already signed, and are expected to be the first of many new arrivals for FC Hollywood over the coming months. By their own high standards, their defeat to Ajax was catastrophic. To the rest of us who live in the real world, it was surprising, but it had been coming, given how far they had fallen since Zidane’s summer departure.

Still, they were very disappointing, and deserved no better than they got.

The tide would go on to change a further three times before Spurs eventually lost 4-3 and advanced on away goals, but for City, the end result was the same; disappointment in Europe at the hands of an English side.

It was an especially tough one to take for Guardiola’s side, because it was supposed to be the year in which they pressed on and realised their European ambitions after two record-breaking domestic seasons, but it wasn’t to be, as they fell short on the big stage again. They seem to be terrified of progress past the round of 16. Two years ago they chucked a four goal lead from the first leg against Barcelona, last year they were bodied by Real Madrid, and this Juventus spent north of £100m to land Cristiano ‘Mr. Champions League’ Ronaldo, in the summer, and couldn’t even make the semi-finals with a favourable couple of draws.

No disrespect to Atletico Madrid or Ajax – they’re both tidy sides capable of beating anyone on their day – but a team with Juve’s aspirations, pedigree and personnel should be able to negotiate that run to the last four.

They were bailed out by Ronaldo in the last 16, as he scored a hat trick in the second leg to overcome a 2-0 deficit, and despite him netting a further two against Ajax over both legs, they find themselves out of the competition. Realistically, what more do they need before they actually begin to show it on the big stage? Is Aaron Ramsey the catalyst to take them to the next level? He’s good, but we doubt it.