​Player of the season lists are boring! You know who’s good! ‘Bad player’ lists suck too, cos that’s just…Huesca players, like.

The happy middle ground? The underwhelming ones, the ones who should be better than they’ve shown. ​Apparently I couldn’t turn this in when it just said ‘Real Madrid’, so here’s the players: 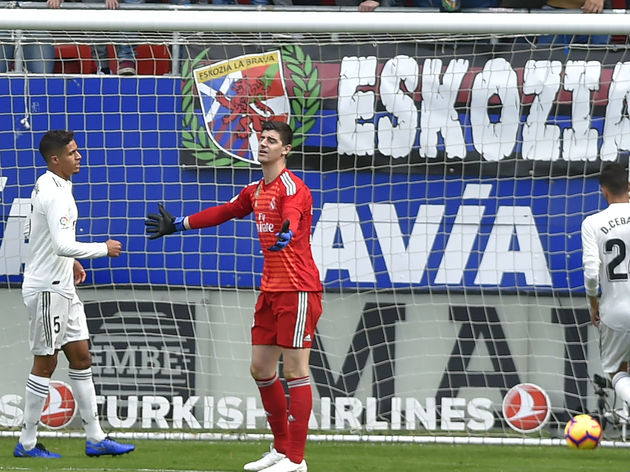 Signed for £35m with only a year left on his contract at Chelsea, on £120,000 a week at the Bernabeu, keeps like a giraffe with gloves on. Has only started once since Zinedine Zidane came back as manager, because Keylor Navas is functionally better than him at not letting in goals. Important.

Has been sharing the right-back spot with Varane has been part of the most underwhelming defence (and team) in ​La Liga, and has been one of its two most surprising collapses. He looked unbreakable at the start of the season, now he just looks broken. Big summer ahead.

Was dropped for Sergio Reguilón by Santi Solari, one of the few things the doomed Spaniard did which was an unequivocal success. It took Marcelo six months to go from being one of the most dangerous attacking outlets in a good team to being out of form, out of shape and out of the team. He’s a favourite of Zidane, so he’s back in the team for now, but…he’s not been any better.

Best player in the world? My arse. He’s started ten games in La Liga and been bad in all of them! Isco was brilliant! He was the creative force in the last Champions League run! And the league title! He’s been bad!

Most of Real’s team are on the beach. Bale didn’t get invited. He’s on the golf course.

Oh, yeah, I wrote about Philippe Coutinho, why it hasn’t worked at Barça, why he might leave in the summer, and the club’s difficult transfer policy. Early lunchtime read https://t.co/nvbKhJHcXk

It’s…you need more? His role on the pitch seems to be to cut in off the left and get in Lionel Messi’s way, then occasionally spank a shot over the bar. This is the man who was signed, apparently, to replace Andres Iniesta. You can forgive him for not being Iniesta, because Iniesta was a one-off. You can’t forgive him for being the third most expensive player of all time and still not being good enough to start games for ​Barcelona. In order: Failed to progress, just plain bad, step backwards, where is the version from Malaga??????, past it, utterly failed Villarreal, gone from double-digit league goals in consecutive seasons to zero goals which is bad.